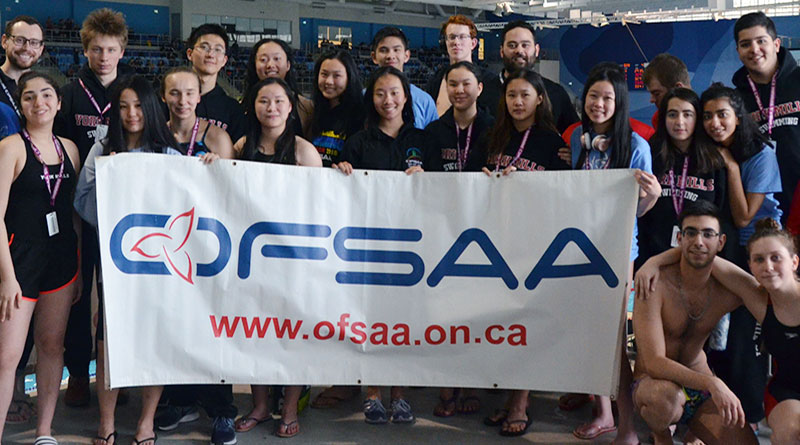 With the introduction of Grade 9s to the team roster, he had more than 80 students trying out for a team that could feature 55 swimmers at most.

It was a nice problem to have, as the depth of the pool to draw from led the team to fully sweep the TDSSAA championships — something the team had never accomplished.

“For years, the junior boys and girls team only had half the number, because we only had Grade 10s as part of the team,” Mahoney said. “It’s really difficult to coordinate that number of swimmers. You’ve got a limited amount of space.”

Mahoney credited the team’s rise to the podium to aquatics instructor Koji Takahashi.

“He’s brought a completely different level of coaching to the team,” he said. “He puts all his energy into and the kids respond well to him.”

Buoyed by the efforts of Barbara Krol and Kristen Lee, they won the banner with 212 points. The senior team, led by Joana Ceddia and Charis Kong, grabbed the silver overall with 275.5 points.

Back to the juniors, Lee grabbed a bronze in the 50 backstroke, while Krol earned a silver in 50 freestyle. The medley relay team, which included Lee and Krol, as well as Nicole Kim and Grace Chen, netted silver.

The silver was a relief to Krol, who wasn’t in the top 3 after preliminaries for the freestyle.

“I don’t know what happened, but I pushed through and I got a medal,” she said. “Once you get into the water, the only thing that goes through your head is, ‘I’m going to win’ and I just did it.”

Her preliminary time was 29.71, which sat her in fourth. In the finals, she finished with a time of 29.15, which was good for second behind St. Francis Xavier swimmer Alyssa Zhang.

Krol had quit club swimming after Grade 8 because of the lack of camaraderie. But with York Mills, her passion for the pool was renewed.

“When I did club, previously, and it was not fun. I would go home after practice and I would want to quit,” she recalled “York Mills, my team, we were really supportive of each other. We’d push each other to do better.

“I felt like I wanted to win for once.”

The team also won gold in the medley relay, thanks to the efforts of Ceddia, Kong, as well as Jennifer Sunny and Erin Kim.

When asked what kept the team together, it was that aforementioned unity.

“When you’re thinking about what you want to achieve, you can work towards those goals,” Ceddia said, in a March phone call. “We’re also really close. We’re all really good friends and it’s a fun environment. I was looking forward to spending time with my teammates rather than go to school.”

Rounding out the medal cache was Michael Lim with a silver in the 100-meter individual medley, and Kimberly Chu with a bronze in the open girls’ 50-meter freestyle.

The commitment of the entire team was “something else” to Mahoney, who said he was impressed.

“I’m really proud of how hard the team worked,” he said. “The swimmers I have been talking about, all the ones who went to OFSAA, put in a really long season. Most of those swimmers started training in October, four times a week at 7 am in the morning.” 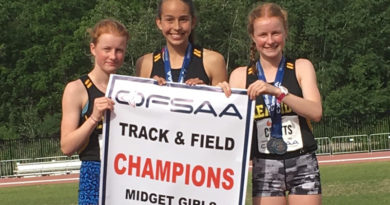