The Ontario Liberals are poised for renewal and will be prepared to defend their longtime status as the governing party, Eric Hoskins says.

Just days before the St. Paul’s MPP was set to announce whether or not he would throw his hat in the Liberal leadership race, Hoskins said in an interview with the Town Crier he’s proud of the investments the government has made, and regardless of who leads the party, it’s time for a change.

“This is a good opportunity I think for the party and for the government to refresh itself and bring new ideas with new people to look at the challenges we’re facing but look at them with a new perspective.”

“He explained that it was difficult for him, and it was also in part a result of just how challenging the legislature had become in the previous months,” Hoskins said.

Though the lights are off in the House, Hoskins stressed it is business as usual in his riding.

Hoskins said he heard from constituents who were concerned about what a halt in legislature activity may mean for the Scarborough-Eglinton Crosstown LRT, which is being 100-percent funded by the province.

“They want to have the confidence and the assurance that the [Eglinton line] is going to be continuing and it is.”

As minister of child and youth services, Hoskins said he is continuing work on initiatives tackling youth mental health issues, and focusing on Aboriginal child welfare.

It’s no surprise that Hoskins, who was appointed to cabinet mere months after handily taking the seat in a 2009 byelection, would be considered a serious contender for the party’s top job.

A physician by trade and the co-founder of War Child Canada, Hoskins quickly moved up the ranks to McGuinty’s inner circle.
“I’m not quite a rookie, but not quite a veteran either,” he said.

Hoskins said he isn’t a career politician, but his work at the federal level (he was at one-time senior policy advisor to then-minister of foreign affairs Lloyd Axworthy), and knowledge of the healthcare system provide a “considerably different perspective than others.”

Said Hoskins: “I think it’s valuable to have people who are newer to the political process but also have in my case more than two decades working as a doctor and a humanitarian,” he said. “I think those skills are incredibly important to bring to a job like this.”

McGuinty with our future transport minister? 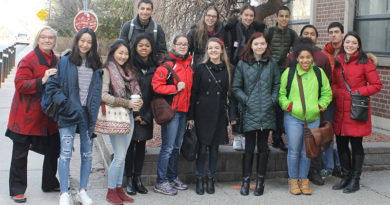