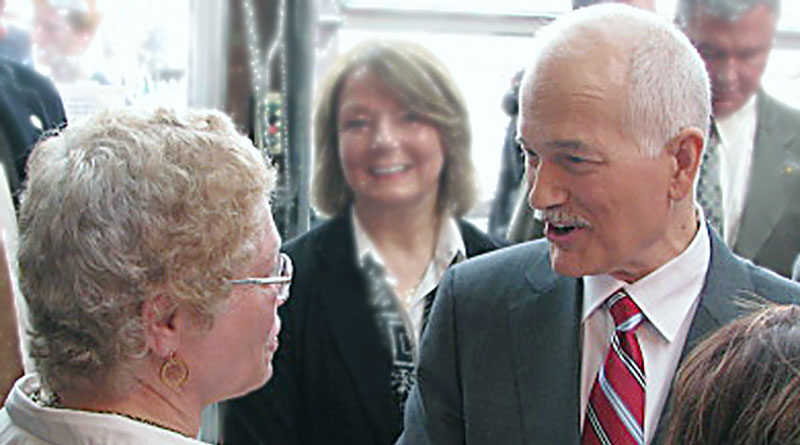 Some of Canada’s leading performers, writers and activists from across Canada are to appear at an online celebration in honour of Jack Layton on Aug. 22.

University-Rosedale councillor Mike Layton made the announcement when he visited his father’s statue at the Toronto waterfront on what would have been his 71st birthday.

“Before his passing, Jack wrote a letter that inspired people across Canada. He offered us hope at a time of great sadness and reminded us, no matter the challenges we face, if we face them together, we can make real, tangible, positive change,” Mike Layton said in a statement on July 18. “Almost 10 years on, Jack’s message of love, hope and optimism is as important as ever—and that’s what this celebration is all about.”

Among the personalities  to appear at the event, called “Love, hope and optimism – Celebrating the Layton Legacy” are musician Steven Page, formerly of Bare Naked Ladies, who is also acting as artistic director.

He’ll  be joined by a dozen others including science broadcaster David Suzuki, children’s performer Raffi,  Juno-winning singer-songwriter William Prince and many others.

Jack Layton was a city and Metro councillor from 1982 to 1991. After an unsuccessful run for Toronto mayor, he became leader of the federal New Democratic Party in 2003.

He served as MP for Toronto-Danforth from 2004 and  became official opposition leader as a result of the federal election of 2011  — the same year he died of cancer.

“Jack loved music, and he would have been thrilled by this amazing lineup,” Mike Layton said of the celebration. “With a little over a month to go, the list keeps growing, and it’s looking better and better.”

So far the list of personalities taking part in the celebration includes:

“I invite everyone from across the country to join us on Aug. 22,” Mike Layton said.

For more information and to RSVP for the online event see the Layton Legacy website.

Liberal candidate getting to work