The 12-year-old merchant was one of the youngest peddlers at this year’s Taste of the Danforth with all proceeds from her handmade jewellery donated to two Toronto charities: the Canadian Reconstructive Surgery Foundation and Mount Sinai Hospital’s neonatal intensive care unit.

The charities were especially close to Madison’s heart because she was born at Mount Sinai with a birth defect called hemangioma, a buildup of blood vessels under the skin or internal organs. The condition required reconstructive surgery as it caused complications when she was growing up.

Madison said she hopes the money will go toward helping kids like her.

“So many people have done things for you, so what better way to give back than doing something involving charity work,” she said.

Since last Christmas, her organization, Beads of Hope, has raised about $750 by selling her creations to friends and family.

She set a goal to raise $1,000 by grade 9, and managed to exceed that goal at the Danforth festival. She raised more than $400 over the course of the weekend.

“We’re ecstatic that she’s been able to do this,” said Madison’s mom Stacey Geridis.

“Considering the cost isn’t very high, and she’s been able to raise (this much), we can’t believe it.”

The jewelry sells for $3–6 a piece and Madison is already planning to sell her wares at her new school in September.

And while the idea for Beads of Hope was all her own, she still takes a hint from her parents here and there.

When asked how much she pays and where she gets her materials, Madison was mum.

Madison got the idea to raise money for a good cause when she learned about young philanthropists Craig Kielburger of Free the Children and Hannah Taylor of the Ladybug Foundation in school.

“After hearing all their stories I really wanted to get involved in charity work,” Madison said.

However, her first charitable idea was perhaps a little too much for her family to handle.

“She actually came to us and wanted us to buy a house as a safe haven for people who have had (their possessions destroyed) in fires,” said Geridis, who helps manage her humanitarian effort. “Her father and I said ‘Maybe we need to scale it down a little bit.’ ”

Leasiders come out to help teams

Help others dress for success 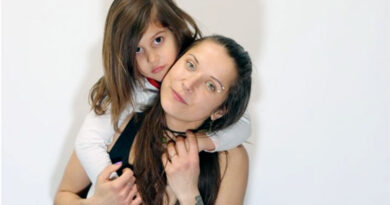