It’s a busy Thursday afternoon and rush hour is under way.

The traffic light changes at the intersection of Avenue Road and Glengrove Avenue West, signalling the east-west traffic’s turn to go, and crossing guard Rolando Santiago blows his whistle, sticks out his handheld stop sign and enters the crosswalk.

Just then, a black SUV in the northbound lanes speeds through the red light, narrowly missing Santiago, about half a dozen children walking home from school, and a woman with a stroller.

“Did anyone get that licence plate?” Santiago asks, to no avail. “He could have killed all of us,” the woman with the stroller says, shaking her head in disgust.

Everyone continues to cross the street safely, and Santiago returns to the northwest corner where he spends his shift. He says incidents like that are far too common at this intersection.

“They should put a uniformed officer here,” mutters Santiago, who has been a crossing guard since he retired seven years ago. “People follow the law when they see an officer.”

Only a week and a half before, the dangers proved to be more than just a close call.

At 4:22 p.m. on Oct. 8, Allenby Junior Public School teachers Mary Marshall, 66, and Kirsten Gold, 46, were crossing from the west to the east side of Avenue Road in the south side crosswalk when they were struck by a Buick Rendezvous making a left turn off of Glengrove to head south on Avenue.

According to Toronto EMS spokesperson Kim McKinnon, the driver of the Buick was treated for minor injuries at a local hospital. The driver of the pickup truck escaped injury.

Marshall remains in hospital, though unconfirmed reports indicate her condition has improved. Gold has been released from hospital and is recovering at home.

As of yet, no charges have been laid, but Const. Clint Stibble of Toronto Police traffic services says charges may be laid later.

At the mention of the incident, Santiago shakes his head. His shift ends at 4 p.m., he says, so he had left only 20 minutes before Marshall and Gold were struck.

“I prayed for them,” Santiago said. “I don’t know them, but I was praying.”

In the main office at Allenby there are three bins. One is marked “Donations for Mrs. Gold and Mrs. Marshall” and the other two — one bin for each teacher — are filled with student-made get-well cards. 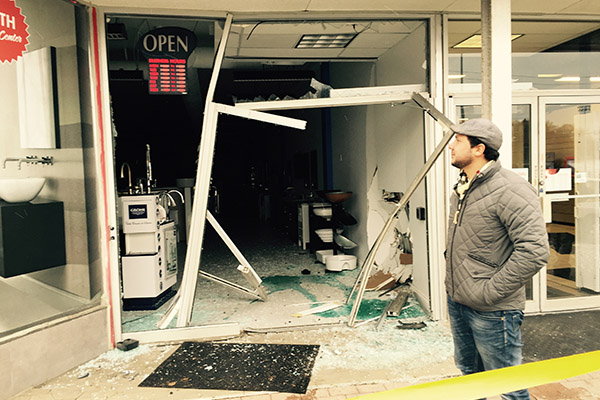