The piano that sat on the corner of Yonge and Eglinton throughout July helped bring music to the city streets.

The piano, with the words “Play Me, I’m Yours” written across the front, was one of 41 pianos that have been placed across the city in celebration of the countdown to the 2015 Pan American games.

For Shane Lambert, the piano gave him an opportunity to play for a crowd.

“I’ve been playing since I was about 11 or 12, and I’m self-taught,” says the teen, who played pop-inspired songs he wrote himself for the crowd that gathered on a mid-July day. “I think the pianos are really awesome, and I plan on seeing more of them.”

Just before Lambert finishes his last song, a passerby approaches the piano, and stuffs a $5 bill into the hands of Lambert’s friend, John Harvey.

“I guess the guy thought we were busking,” he says. “I don’t really get why (the piano’s) here, but it really draws a crowd.”

The pianos were part of a project by UK-based artist Luke Jerram called Play Me, I’m Yours, the idea for which came to him while at a laundromat.

“No one ever talked to one another, but there were these invisible communities,” he says. “A piano seemed like a good way of getting people talking. One hundred years ago, everyone had a piano at home, so it was natural. The pianos act as a blank canvas for expression, so whether you play Chopsticks or Beethoven, you can be a performance artist.”

And at Yonge and Eglinton, strangers weren’t just talking, but meeting. Jordan Sobel, a lawyer, talked to the crowd before he takes a seat at the piano.

“Up there is public housing,” he says, pointing up the street. “And over there are condos for yuppies. Here? They’re building a residential tower. Each neighbourhood is so diverse, and these pianos can really bring us all together.”

Sobel sits at the piano as Lambert leaves, and starts bobbing his head up and down as he plays some jazz. The crowd is still growing, and behind him, a woman turns to a passerby and starts talking.

“This really restores my faith in humanity.” 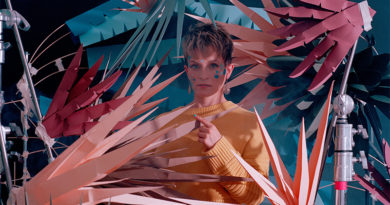