On Jan. 21, volunteer cruelty officers from the Etobicoke Humane Society and officers from Toronto Animal Services removed the 30 cats from an Islington Avenue apartment.

Cruelty officer Jerry Higgins said the 30 cats that were rescued were among the sickest he has ever seen in a hoarding case. Many of the cats suffered from upper respiratory infections, FIP (feline infectious peritonitis) and neurological problems. He said that unfortunately, the two most critically ill cats could not be saved.

After four major cases in 2010, this was Etobicoke’s first major rescue of 2011.

Higgins said the team that rescued the cats had to do so with a warrant.

According to Higgins, the woman at the centre of this hoarding case is a repeat offender.

“About two years ago, the same number of cats were taken out of there,” Higgins said.

Charges could be pending, Higgins said, but it’s up to Toronto Animal Services. He also couldn’t comment on whether the woman was charged in her hoarding case from two years ago, though he did say she “voluntarily surrendered” in that incident.

Four cats are still being taken care of at Toronto Animal Services, and the rest, according to Higgins, have been well enough to be held in isolation at the Etobicoke Humane Society.

Higgins said in this case the woman had cats that were not spayed or neutered and her above-store apartment had cat doors, which let the cats come and go as they pleased.

“The problem with that is she’s bringing other cats in, they’re infecting her cats and vice versa, so she’s cross-contaminating the whole neighbourhood,” Higgins said. “These are probably the sickest cats I’ve seen in this kind of situation.”

To prevent cases of cat hoarding, Higgins said the message is simple.

“If you like your cats,” he said. “Spay and neuter them.” 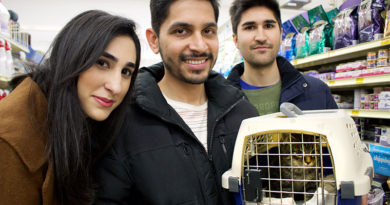