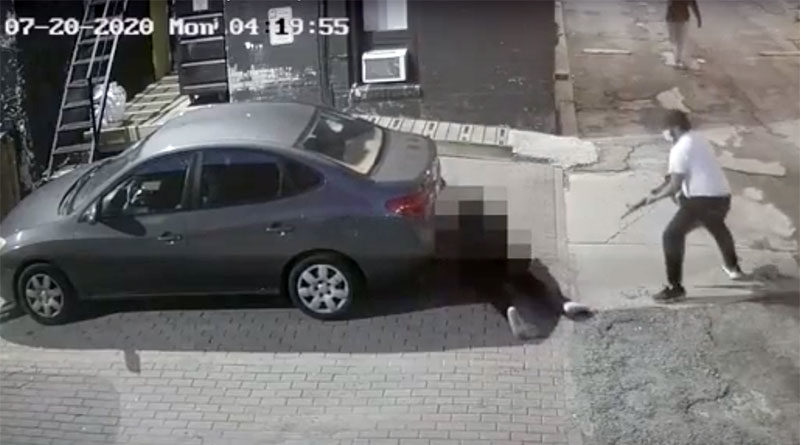 Police are trying to identify three men who allegedly robbed a couple at gunpoint near Gerrard Street East and Pembroke Street on Monday morning.

A 20-year-old man and 19-year-old woman were walking in the area when they were approached by three men, one with a rifle, police relate in a news release.

The man and woman ran away but the man was chased into an alley where he was allegedly held down at gunpoint and robbed of personal items.

The alleged robbers fled in two cars, described as a red Honda Civic and a black Porshe Macan.

Officers responded to the robbery call shortly after 6 a.m.

Police released security camera footage showing the alleged robbery in the alley. The video is date-stamped about 4:20 a.m.

They also released descriptions of the three men being sought.

The man carrying what was thought to be an AR-15 rifle, is described  as white, in his 20s, 5-foot-9, and with a heavy build. He was said to be wearing a white t-shirt, black pants, black baseball hat, black shoes, and a mask covering his nose and mouth.

Another man is described as black, in his 20s, 5-foot-10, and with a slim build. He was said to be wearing a mask covering his nose and mouth, black hoodie, white pants, and white shoes.

A third man is described as black, in his 20s, six feet tall, and with a medium build. He was said to be wearing a black sweater, black pants, black shoes, and a mask covering his nose and mouth.

Police advise they are all considered armed, violent and dangerous.