Some midtown councillors are not impressed by a plan to cancel Eglinton Connects put forward by mayoral candidate John Tory, with one local representative saying he is “disappointed” and another calling the idea “ludicrous.”

Tory, one of five high-profile candidates challenging Mayor Rob Ford in the Oct. 27 municipal election, suggested in an April 17 policy statement doing away with Eglinton Connects as a part of his “Fighting Gridlock Initiative” to combat congestion in Toronto.

Eglinton Connects is a joint effort of the city and province that created a plan for the stretch of Eglinton Avenue that the Crosstown spans. The comprehensive plan was adopted by the planning and growth committee in April and includes plans for streetscape projects, mid-rise development opportunities and redesigns of traffic lanes to incorporate more modes of transit.

Tory’s main concerns were the removal of some traffic lanes in some areas and the estimated cost of the project being $150 million, and not yet being funded.

Ward 21 councillor Joe Mihevc didn’t mince words in expressing his opposition to Tory’s statement, saying the mayoral candidate has contradicted himself on his position of seeking professional expertise on all city issues.

“Eglinton Connects is one of the most complex planning studies that I have seen at the City of Toronto, and for a major candidate to say in a single statement to wipe it off the map is nothing short of ludicrous,” Mihevc said. “Eglinton Connects, I predict, will win national and international awards for the complexity and nuances in the forward thinking from that entire project.”

Ward 22 councillor Josh Matlow, however, was understanding of Tory’s position and said if his position is concerns over removing lanes and spending money that isn’t budgeted, then he thinks they could work together to find common ground.

“Maybe they don’t need to remove as many lanes,” Matlow said. “Maybe there can be a compromise.

“I agree that you shouldn’t spend money that isn’t budgeted for, but the plan doesn’t say it needs to be spent in one fell swoop.”

Matlow added, however, that he has “no doubt” that if Tory became mayor he would “reach out to councillors like myself who represent a ward that abuts Eglinton and listen to what residents are saying” about the Eglinton Connects project.

“We will always face the challenge of how to take the concept and bring it to reality, and that is a challenge that I look forward to engaging,” he said. “But the concept of Eglinton Connects is exactly the formula that we should be pursuing and I’m hoping that John Tory will come to see that in due course.”

Ward 16 councillor Karen Stintz, who is running for mayor, did not respond to a request for comment, but did release a statement on her website suggesting Tory was wanting to cancel a “major improvement project” when the city should instead be focusing on helping the businesses on Eglinton during the construction. 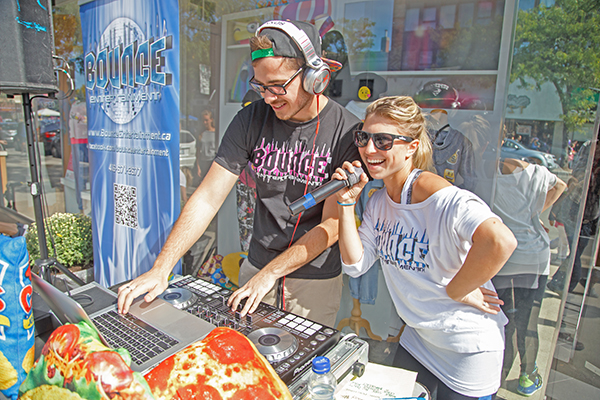 Even Mayor John Tory came by the Fall Fest