Every year at the NaMeRes National Aboriginal Day Pow Wow, every elected representative who speaks begins by recognizing that at Wells Hill Park we are on the traditional lands of the Mississaugas of New Credit. At our Canada Day ceremony we begin with a drummer and a smudge ceremony. Now, even at the Annual Skills for Change Pioneers Dinner celebrating the wonderful successes of Canadians who chose Canada as their new home, the evening begins with an elder and a welcoming prayer. This is huge progress.

Last month at the Truth and Reconciliation Commission hearings in Toronto, many, many non-aboriginal people — churches, youth delegates with Cynthia Wesley-Esquimault’s inspiring Canadian Roots Exchange — came to bear witness and stand in solidarity with the victims of residential schools. As Justice Murray Sinclair and the commissioners stated in their interim report:

“Canadians have been denied a full and proper education as to the nature of Aboriginal societies, and the history of the relationship between Aboriginal and non-Aboriginal peoples and that the federal government must take an active role in promoting awareness and public education to Canadians about this history generally and the residential school system and its impacts on Aboriginal Canadians specifically.”

In New Zealand they made huge progress when they incorporated Maori Studies into the curricula of all classes, from kindergarten to grade 8. The commission is calling for the same changes here in Canada. The Prime Minister’s apology to the victims of residential schools means absolutely nothing if the people of Canada don’t truly understand what the apology is about.

As the Assembly of First Nations meets this month in Toronto, we have a tremendous opportunity for each one of us to commit to do our own small part to better understand the truth and the path to true reconciliation. We each can do better. Feeling badly about Attawapsikat is not enough. We all need to know the history.

We all need to know more about the portage from the Humber to the Don that now is Davenport or the Huron Village that existed at Yonge and Eglinton.

Next year will be the 250th anniversary of the Royal Proclamation — the agreement between the Crown and First Nations as to how the colonizers would fairly share their traditional lands. It was a good start. Since then the paternalism of the Indian Act, residential schools, the failure to share the resources on their lands, flowing through their lands and under their lands.

Get involved. But mainly we need to hear the personal stories so we can break through the stigma and the racism. First Peoples are the fastest growing demographic in Canada. With luck soon each of us will have First Nations, Inuit and Métis people as our friends and personal coaches on our journeys. 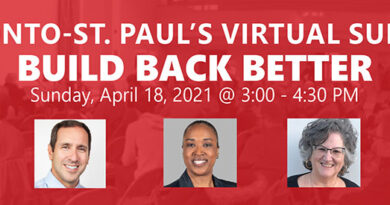