Residents trying to preserve a cluster of trees in Taylor Creek Park are crying foul after Hydro One stepped in to remove several earlier this month.

The trees were under threat as they stood near the entry point of the Coxwell sewer bypass project, which began mid-May.

The city’s water department had staked out a large area for the bypass’ entrance but after meeting with residents on April 22, the contractor agreed to move the construction site back so some trees, including a white pine, could be saved.

But five days later, utility Hydro One’s forestry staff cut down some of the trees as they were trimming plants in danger of touching power lines.

As it turns out, because the trees are on Hydro One property, Toronto’s tree protection bylaws do not apply.

Hydro One spokesperson Daniele Gauvin said two trees were cut down — a rotting maple tree that was in danger of falling during the next windstorm, as well as a white pine that was growing into the path of the power lines.

They also trimmed an invasive fast-growing bush called black locust, which residents could have mistaken for a tree, she said.

But resident Daryl Sarkisian said that the Hydro One arborist told neighbours on May 4 that the white pine could have been saved if they knew the community was trying to preserve it.

“That blew me away, it really sunk me to the ground, ” Sarkisian said. “It goes to show me, how much communication is there?”

Hydro One did tell the forestry department that they were coming in to trim the vegetation in the park, which was confirmed by the city.

But Hydro One only gives the city general information, like which month they will be coming in and what lines they will be servicing, said Richard Ubbens, Director of Urban Forestry. The city isn’t told which specific trees will be trimmed or cut down, he said.

Meanwhile, Toronto Water officials, who worked directly with residents and the contractor to preserve the trees, were not aware that Hydro One had plans to trim vegetation.

Urban Forestry did send a representative from their ravine protection group to offer advice to Toronto Water and residents on how to save the trees.

But Ubbens said the ravine protection group has no contact with Hydro One, and the representative working with residents may not have been aware that Hydro One was coming to Taylor Creek Park.

“It was not by design, it was simply a coincidence,” he said. “Unfortunately, the two dots didn’t get connected that well. It’s a big city.”

Sarkisian said Hydro One also took down a group of spruce trees in Taylor Creek Park. One of the trees still had a bird’s nest resting in one of its branches.

When residents challenged the arborist about the spruce trees, Sarkisian said he was told that they wouldn’t have taken them down because they were far enough away from the lines.

Sarkisian said he understands Hydro One has a responsibility to prevent trees from disrupting the power lines but he is upset because he feels all the work residents and city officials have done trying to preserve the trees has been wasted.

He wants the city to put signs in the park so residents know who to contact if they have questions about any projects.

Sarkisian said if anything positive is going to come of the tree-cutting, it’s “more accountability so this doesn’t happen again.” 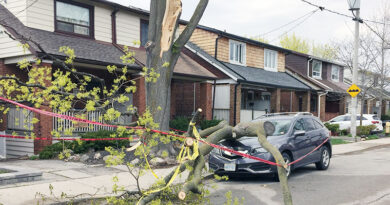 Bayview sidewalk to be torn up