Work has commenced removing the soil from the Ashbridges Bay site to build a controversial TTC storage yard, but some say the commission is still on the wrong track.

The facility, which will be located at the corner of Lake Shore Boulevard East and Leslie Street, is being built to house as well as maintain 204 new streetcars expected to start running in 2013.

Councillor Mary-Margaret McMahon has argued for months that the site is the wrong location. Now residents are concerned about a connecting streetcar track that would run along Leslie Street to Queen Street East.

Leslieville Residents Association member Nancy Hawley, who said she lives just a block away from the proposed streetcar track, said it would have a detrimental effect on Leslie Street due to erosion from runoff, additional traffic congestion and noise pollution.

“For the community in Leslieville, it’s a big issue because it’s going to turn Leslie, which is already pretty busy, into a rail-line corridor,” she said. “(That’s) going to destroy that street.”

Ward 30 councillor Paula Fletcher agreed, saying an alternate route, running through the west end of the Russell Yard, west on Eastern Avenue, south on Knox Avenue and across Lake Shore Boulevard East would be a better idea.

“It’s a dumb route,” she said of the Leslieville path. “There’s too much going on Leslie already.”

TTC chair Karen Stintz said Fletcher’s alternative was looked at but was determined to be unfeasible.

“We would have had to construct a new road on Knox (Avenue), add a new traffic light,” she said. “It would have crossed over two bike paths, and there would have been more difficulty entering the Ashbridges Bay site.”

Stintz added changing the route would require a new environmental assessment and significant infrastructure changes, which could put project completion at risk before the arrival of new streetcars.

Hawley doesn’t accept that line of reasoning. She said she feels the TTC will regret the decision in the long run.

“Bad planning is bad planning,” she said. “We’ll pay a price for it.”

Stintz said the TTC has had a number of consultation meetings with the community, which resulted in a reduction in the number of vehicles that will leave the Ashbridges Bay site each day from 85 trains to 72.

She said most of the concern she has heard is related to how construction will affect residents along Leslie Street. Stintz said a further meeting will be held to determine how fast they want the line built.

She also said the streetcars would be significantly quieter than the city’s current fleet due to new technology.

“The way they’re designed, they have low floors and also pads around the wheels,” she said.

The TTC wants to have the facility completed by 2013. While Stintz did not have a definitive timeline, she expects that construction of the track along Leslie Street will be done between 2012 and mid-2013. 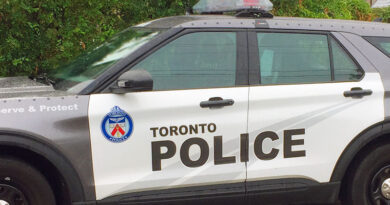