Barrington Anthony Sayers, a co-host of a popular HGTV show facing various extortion and criminal harassment charges, is not actually licensed to be a contractor, police said days after his arrest.

“He did have a licence and he is aware that he’s supposed to have one, but he hasn’t been licensed since (2008),” Detective Rob Ermacora told the Town Crier.

Ermacora said the information came to light after Sayers’ arrest.

Sayers, who also goes by Anthony Sayers and was featured as the carpenter on Me, My House and I, as well as being the current co-host of The Unsellables, was arrested March 12 in connection with an extortion investigation.

Police say Sayers was hired by a female resident in Summerhill, on Feb. 1 to complete renovations on her home. The 41 year old owner of Anthony Sayers Custom Builder and Designer then allegedly “provided substandard work, criminally harassed and extorted the woman.”

“In this particular case he didn’t have any of that,” he said adding that while Sayers did not physically work on the job himself, he is still ultimately responsible for it. “He was the one responsible for the job, he was the general contractor.”

Sayers allegedly caused the woman to “fear for her safety” according to Ermacora, who wouldn’t get into specifics, but said that’s where the criminal harassment charges stem from.

“In fact (the woman was afraid) to such a degree that she moved out of the house for a period of time,” Ermacora said.

Ermacora stressed the importance of people coming forward who may have had Sayers do work on their homes, saying he is known to have worked frequently in the Forest Hill, and predominantly in midtown Toronto.

“I imagine he’s fairly popular because of the show,” Ermacora said of Sayers, who he also described as “not a nice man.”

Sayers has been charged with two counts of criminal harassment, and one count each of attempted fraud under $5,000 and extortion.

He was released from custody and is scheduled to appear in court March 28.

On television, Sayers appeared in all 52 episodes of Me, My House and I, according to the show’s website. The show, which played on W Network, aired its final episode on Dec. 1, 2005.

His second stint on television has been as co-host of The Unsellables, a home-flipping series on HGTV, in which Sayers is described as the “trusty contractor” according to the show’s website.

It also says that he has worked in the building trades for 17 years, and that he operates his own business, which has “a large and dedicated clientele in the Greater Toronto Area.”

Ermacora believes there may be more victims, and is urging people to come forward.

“We believe there are other people that have been victimized by this guy, and we’re certainly interested in them coming forward to the police.”

How to let home nurture your soul 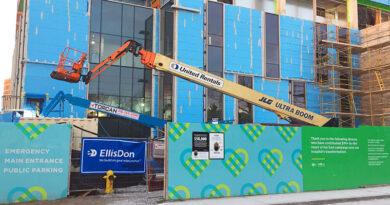 Arrests made in bomb scare