The first time I saw Nandor Horthy’s art work I fell in love with his dark, rich colours played out against the illuminating golds and
whites.

In an era when digital copies bombard our senses, it is a thrill to be romanced by Nandor’s traditional realism.

The exquisite detail is astonishing and his patience with a fine paintbrush an inspiration. Every brush stroke purposely contributes to the drama of his story. I felt that if I blew out the candle in one of my favourite paintings of his the whole scene would be plunged into darkness.

When asked about his influences, Nandor mentions the 15th- and 16th-century painters Rembrandt and Van Dyke.

In his “Cityscapes Series”, which you can see on his website, www.nandorhorthy.com, you will instantly recognize North Toronto, as well as the influences of the old masters.

Even Nandor’s North Toronto house speaks to his creative talents. It is surrounded by his beautiful modern sculptures that are an exciting contrast to his more traditional paintings inside.

Nandor was born in Hungary to artistic parents, and enjoyed working with his hands. He was schooled in general arts at a military academy and became a professional saxophone player, working in a big band. A year after the Hungarian Revolution of 1956, Nandor escaped Hungary with his pregnant wife Eva, their 6-year-old daughter, his beloved saxophone and a very strong work ethic.

While Eva pursued a successful career as a fine artist, Nandor worked as a sign painter for the Mac’s Milk chain.

This steady work allowed him to further develop his own fine art skills. After 10 years he took a leap of faith, walked away from his full-time job and began his own 50-year career as a fine artist.

“A piece of art is not mass produced,” he answered when asked what the creative process means to him. “It is something you pour yourself and your emotions into.

“When someone falls in love with one of my paintings I am thrilled and excited that my achievements have been acknowledged and a connection has been made.”

Every day Nandor and his wife, Eva, thank God for the opportunity they have been given to make a successful life here in Canada.

We at the North Toronto Group of Artists are also happy that they choose Canada as their home. 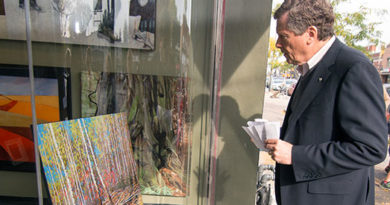