Police have released video and still images of a man wanted in connection with the investigation of an alleged assault of a woman a week ago in Davisville.

The woman, 29, was in the area of Balliol Street and Pailton Crescent at about 9:54 p.m. on March 11 when she was approached by a man and sexually assaulted, police reported earlier.

The video shows a tall man with a beard and swearing a cap, walking through a parkette and onto a sidewalk a little distance behind a woman in the evening. At one point he pauses behind a post, possibly a digital parking meter, before entering the better lighted area of the street.

Police are asking the public for help in identifying the man in the video and images.

He is described as being in his late thirties to early forties, 6-foot-1, and about 160 pound. He is believed to have a dark brown goatee and a rounded back with poor posture. He was last seen wearing grey sweatpants, a black sweatshirt and a black toque, police say. 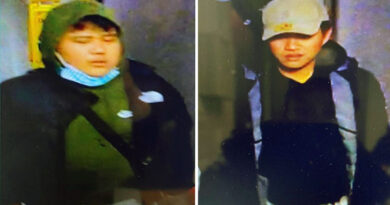