Ears perk up. Tails wag vigorously. The sound of excited short barks from cages fills the air at the Toronto Humane Society, as the Rousselle twins prepare for their first round of dog walks.

“It’s a pleasure when I make a dog happy,” says Luc Rousselle.

Leaside residents Luc and Dominique have been walking dogs for the humane society for two years and were recently recognized for their outstanding volunteer efforts during the humane society’s Be Kind to Animals Week 2011.

And it’s the twins’ passion and dedication that earned them this award, said Ann-Marie Colacino, the society’s communications manager. She said the society was so understaffed that at first the twins would spend six or seven hours a day exercising the canine residents.

Each shift lasts 20 minutes. The duo has also undergone training to walk dogs with behavioural problems.

“We are red dog walkers,” said Dominique. “We can walk dogs that are aggressive, shy or tough.”

Although the Rousselle twins, both retired French teachers, didn’t own a dog growing up, they’ve always loved dogs. Their passion was reignited when they would pass the dog park at the humane society on their way to work. Dominique even began visiting the shelter.

“I went to see the dogs once a month to see how long they’ve been there,” he said.

In fact, Dominique said he decided to retire a bit earlier just so he could start volunteering.

Today, the twins volunteer three to four times a week for three hours a day. But their animal welfare doesn’t end there.

“He was about to be euthanised,” said Luc. “He had been there for three years and nobody wanted to adopt him.”

Not to be outdone, Dominique adopted two dogs. One recently died, and the other, Kiji, was an unwanted dog. She was aggressive, sick and emaciated when he first adopted her.

“I always adopt old and sick dogs because they have no chance of getting adopted,” he said. “People don’t adopt dogs with issues.”

Luc and Dominique carry their love of dogs with them as they travel the world — from Vietnam to France to Argentina.

Both twins donate their own money to animal shelters in the countries they visit and feed the stray and unwanted dogs. Often they’ll take them to the local shelters and veterinarians or try to find families to adopt them.

Luc said he tried to save dogs in Vietnam likely destined for the kitchen. He was fuming with anger when he noticed a bike carrying a cage with dogs fit like sardines. He got off his bike and asked the owner if he could sell him the dogs instead, unfortunately the owner refused.

“The dogs at (Toronto Humane Society) have no idea how lucky they are,” Luc said. 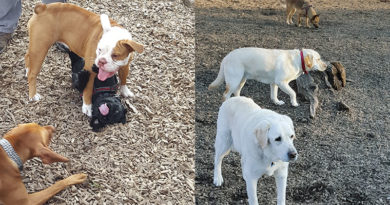