Parkdale-High Park is a rematch between Liberal Gerard Kennedy[/url] and the NDP’s Peggy Nash[/url].

Kennedy won the seat in 2008 when he beat first-term incumbent Nash.

This showdown mentality was on display during an all-candidates debate at Swansea Town Hall on April 13.

One of the contentious issues of the evening was Kennedy’s attendance for Parliamentary votes. Nash’s team was passing out a Globe and Mail article she said is based Hansard, the complete minutes of Parliament. An addendum to the article claims between Nov. 2008 and March 2011 Kennedy missed 122 votes and was present for 241 out of the 363 total votes.

Kennedy’s team countered he was present for 272 votes and 32 paired (a system whereby an opposition and a government member both agree to be absent for the vote and are not normally counted as absences) for a total attendance record of 304 votes out of 363.

The two candidates had a few exchanges regarding this at the debate at one point Kennedy appeared quite emotional as he said, “Don’t accuse me of not working hard for this community.”

He said he attended votes in Ottawa even at times when close family members were battling severe illnesses.

Nash didn’t back down even using part of her closing remarks to say that she too had family members close to death and made it to votes when she was MP.

“His (voting) record is part of the public record.”

The debate tackled a wide range of issues including climate change, Canada’s image on the world stage, jobs, immigration and helping seniors.

Before the debate Kennedy told the Town Crier helping seniors, health care and jobs are topics he’s hearing about at the door.

“There are still 460,000 more people either out of work or working part time that want to be working full-time,” said Kennedy, who represented the riding provincially from 1999-2006.

During an interview after the debate Nash decried the practice of strategic voting which some experts think could rob the NDP of a chance in a number of ridings.

Because the Conservatives aren’t going to win in Parkdale-High Park, she said, a vote for the NDP won’t risk voters waking up to find they’ve elected a Conservative MP.

“I think it’s changed from past campaigns where (strategic voting) was a dominant message,” said Nash. “What I am hearing more is people are voting more with what they believe … So I try to encourage people to vote for who’s going to be most effectively as their representative.”

While the May 2 vote in Parkdale-High Park looks to be a straight Kennedy vs. Nash fight, other candidates made their voices heard at the debate.

Local resident and Conservative candidate Taylor Train[/url] told the debate’s audience that he takes steps at home to make the world a little greener.

The former soldier was also quite passionate as to why Canada is serving in Afghanistan.

“We are in Afghanistan so girls can go to school without having acid thrown in their faces … so gays won’t be buried under mud brick walls.”

The Christian Heritage candidate Andrew Borkowski was born in the riding and mentioned working, playing and volunteering locally, brought up his anti-abortion stance on more than one occasion.

On a question on supporting seniors Borkowski told the audience, “We have to stop the practise of abortion which wipes out money that could be used to support seniors.”

And on a question of support for the CBC, Borkowski said he’d defunded until it changed its “anti-Christian bias”.

“I’d like to see a Being Erica episode where she redoes her regrettable abortion,” said Borkowski.

On his vision for Canada, Borkowski said he’d like to see “babies, babies and more babies.”

The election is May 2 and the Parkdale-High Park race also features candidates Lorne Gershuny from the Marxist-Leninist Party, the Green Party’s Sarah Newton and Marijuana Party’s candidate Terry Parker. 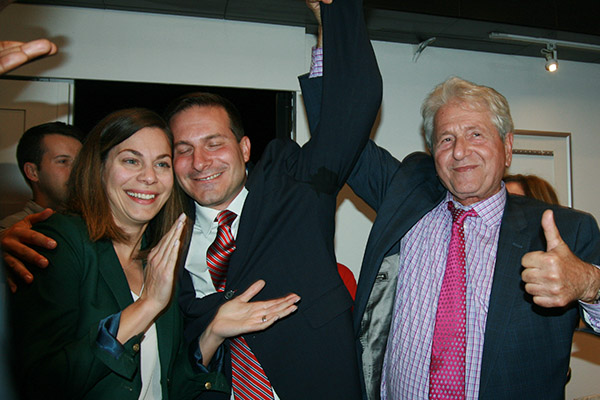