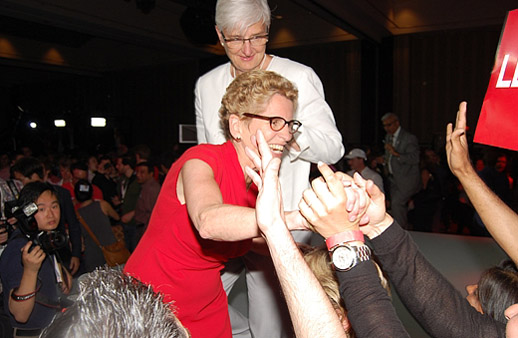 Call it a Wynne-win-Wynne-win scenario.

Liberal leader and Don Valley West incumbent Kathleen Wynne has come out on top in her local riding and as premier with a majority government.

Less than two hours after most polls closed Wynne’s Liberal party is being declared a majority, with as many as 58 seats to the Progressive Conservatives’ 28, while the NDP sit at 21.

Wynne sent an email message to the Town Crier at about 10:30 p.m., thanking constituents for their support.

“I’d like to thank my constituents for re-electing me as their MPP for Don Valley West,” she said. “I know that we will continue to build stronger communities by investing in health care, education and transit.

“And finally I’d like to recognize my amazing team of volunteers who came out to support me in this important election.”

It wasn’t even a contest in her local riding. Wynne has 57 percent of the vote, with PC challenger David Porter well back at 30, followed by second-time NDP candidate Khalid Ahmed with 8 percent.

Porter said the loss for him likely comes from leader Tim Hudak’s plan to cut 100,000 jobs, which he called “too harsh” in many voters’ eyes.

“Overall, in order for us to make significant inroads in Don Valley West we needed a successful campaign at the top,” he said.

“I’m not surprised. I certainly knew this riding would be tough under any scenario.

“The scenario in which I would have actually pulled off an upset would have been when the PCs were clearly in majority territory and people looked at Kathleen as yesterday’s news.”

At Wynne’s party, several recognizable Liberals made appearances. St. Paul’s school trustee Shelley Laskin said she had predicted the day before that the Liberals would win a majority.