Over the past 25 years, Wayne Fromm has invented more than 50 commercially successful products.

He is the man behind Nesquik’s Magic Milkshake Maker, Crayola’s Colour and Show Projector and Disney’s Beauty and the Beast Talk n View Magic Mirror.

“It’s a real kick as an inventor to go anywhere in the world and see something that you’re responsible for,” Fromm said during a recent interview, perched on a couch in his Forest Hill living room.

His inventing debut can be traced back to childhood, when at age 6 he came up with a makeshift TV remote control.

“I was able to control the volume and turn it up and down,” he recalled. “I’ve been fascinated with trying to find solutions since I was a kid and then it just evolved as I got older.”

Although he’s still creating products for companies like The Walt Disney Company, over the last few years he’s been busy collaborating with his 25-year-old daughter, Sage, for their own company, Fromm Works Inc.

“In the early 2000s my father and I were traveling and we constantly had to flag down a stranger to take our picture together, and had to worry about the stranger running off with my smartphone or our camera,” Sage said. “Attempting to stick out an arm to take a selfie, we found ourselves cut off and not centered.”

They knew there had to be a solution — “a better way to be able to be in your own footage.”

Three years and more than 100 prototypes later, that vacation experience led the father and daughter to develop the Quik Pod, a series of gadgets for achieving a better self-portrait.

The extendible, handheld monopods, which can be used with smartphones, GoPro, DSLR and point-and-shoot cameras, allow people to easily take and be in their photos.

“We have different models depending on the reach you want, but the idea is you are finally able to be in your own footage,” Sage said, adding some models are also fully waterproof.

“They all come with self-image mirrors — we call it the selfie mirror — so it allows you to line yourself up with your camera lens before you take your footage.”

Since the Quik Pod first hit shelves in 2006, it’s been featured on The Tonight Show with Jay Leno and on Oprah’s O List, was used by Justin Bieber in the filming of the Beauty and a Beat music video and sold out numerous times on The Shopping Channel and QVC in the U.S. It also landed the pair a deal on Dragon’s Den.

Today the award-winning device, which includes a recent design and innovation nod at the 2014 International Consumer Electronics Show in Las Vegas, can be found in 40 countries, at professional camera shops and retail giants Target and Best Buy.

It’s also found a market among athletes and action enthusiasts, and the owners said they receive shots of people using the Quik Pod to capture pictures in situations like mid-skydive or while flying a glider. GoPro, a go-to camera for adventurous photographers and videographers, also supply their media teams and sponsored athletes with the device.

Although this endeavour is the first time the duo has worked together in an official capacity, Sage grew up testing her father’s inventions, providing feedback, was often featured in media spots about his work and attended her first business meeting at Disney when she was four years old.

Reflecting on his inventions, Fromm said he still holds fond memories of developing the Beauty and the Beast mirror, for which the cast recorded original sound clips.

But unlike products with a limited shelf life because of their association with movies, he said he likes the longevity of the Quik Pod, as it continues to grow with new developments like the iPhone.

“I can be up all night working on something, I can go two days without eating if I’m in the middle of a project,” Fromm said. “Probably like an artist painting a canvas, you lose track of time. It’s just so enjoyable.”

Sage, whose image can be found on the packaging of some of the Quik Pods, said being able to work with her father every day and learning from CEOs and top people in the industry is one of the many perks of the job. She said the pair is often invited to colleges and universities to speak about their success.

“We love the fact that we took a product, created it, started it here in this part of Toronto and without any employees were able to get it all over the world,” the older Fromm said. 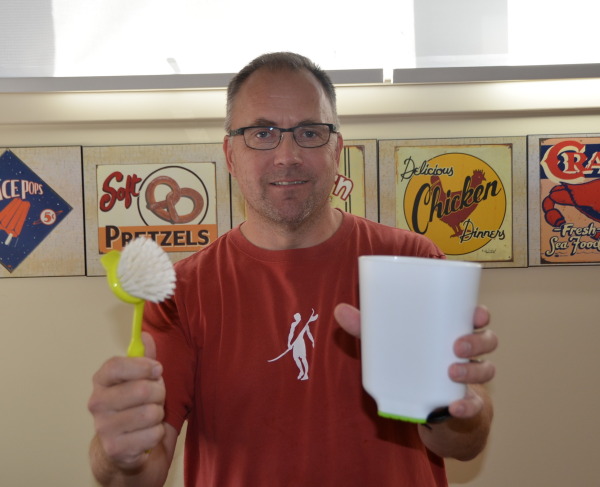