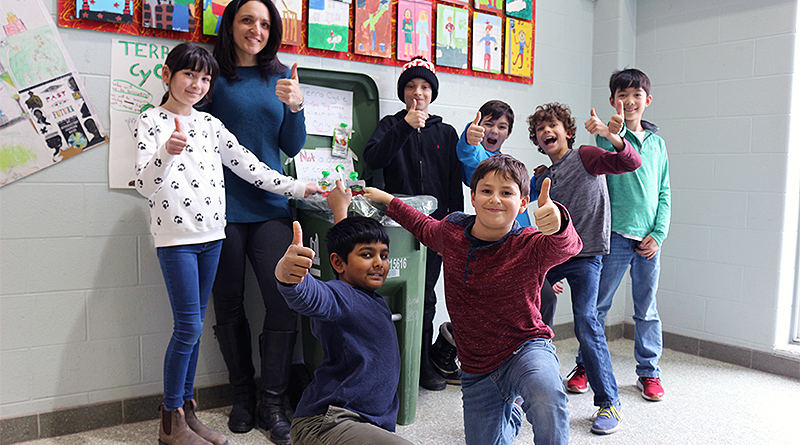 John Wanless Junior Public School has revisited an old ally, recycling company TerraCycle, in its pursuit of being eco-friendly.

In December, the Bedford Park school restarted its Snack Pouch, Schneider Lunch Mate and Yves Veggie Cuisine recycling program. At the helm is Grade 6 teacher Lisa Higginbottom. Students collect the waste that traditional recycling methods, such as municipal governments, don’t have the budgets to cover.

Higginbottom first started the program in 2010 after a student brought in a product that had been the result of Terracyle’s recycling process. After three years of dedication, when she went on maternity leave, the program remained idle.

Gathered in the school’s foyer on March afternoon are seven of the school’s team members. The students from Grades 4 to 6 are buzzing with energy. Seth Biederman, Riley Burchall, Matthew Ensor, Eli Faith, Imogen Hansen, Arun Mohabeer and Kai Williams gather around a green bin.

Unofficial team captain Riley shared that the team makes announcements encouraging their peers to drop off their GoGo squeeZ pouches into the designated green bins.

The kids then collect the materials and drop them off at designated locations where they earn TerraCycle points. The packaging is then melted down into plastic pellets to help make picnic tables and park benches.

And they love every aspect of their eco-friendly drive.

“We have fun making posters but also helping the earth,” Imogen said.

“You’re getting rid of garbage in a better way,” Arun added.

An initial collection by the current eco club yielded 350 units, at a penny per unit. The money earned from those go into the aforementioned points.

“Everything technically has a recycling solution, it just comes down to economics,” she said in an email. “TerraCycle bridges this gap in funding recycling solutions for waste streams that are more complex and costly to recycle.”

She used the example of aluminum, which is a more cost-effective solution than a squeezable snack pack. They are encouraged by the relationship that’s been rekindled by the school.

“John Wanless is a pretty new partnership, so we’d like to continue to foster that relationship,” Li said.

Beautiful beads from a surprising source

March 20, 2015 Lenore Locken Comments Off on Beautiful beads from a surprising source