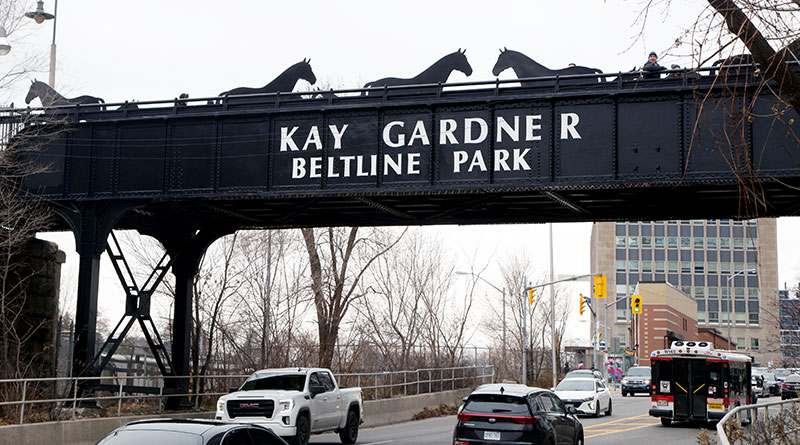 It was meant to be a temporary installation in May 1994 — a sculptures, dubbed the Iron Horse and placed along the Beltline Bridge over Yonge Street south of Davisville Avenue, by artist Robert Sprachman.

It ended up staying there two years.

And now, 25 years after the initial installation, the beloved Iron Horses have returned and are again trooping along the Beltline over the overpass, now named after former city councillor Kay Gardner.

The Midtown Yonge BIA, which was instrumental in getting the horses back, held an unveiling event yesterday along with Toronto-St. Paul’s city councillor Josh Matlow, the artist himself, and about 40 local residents.

The BIA and the city are sharing costs of the re-installation, while the BIA will oversee ongoing maintenance.

The group saw including the Iron Horses in its streetscape plan for the area as an opportunity to demonstrate its commitment to both the business area and to to the broader community, Midtown Yonge BIA chair Jennifer Gittins said in announcing the plan. “Acting as a patron of public art may not be a typical BIA endeavour, but in this case, and in this prominent location, and with considerable City support, including that of Councillor Matlow, it just makes sense.”

The Iron Horse sculptures are not the same ones that were displayed from 1994 to 1996. In fact, they aren’t even iron.

Sprachman offered to donate the six original sculptures to the city in 1996 but the city demanded fifty thousand dollars for maintenance. So instead, the horses were sold off. Three of them are now on display at Windfields Middle School on Banbury Road in the Windfields neighbourhood.

The 12 new sculptures are recreations of the originals but made from mainly recycled fibreglass and plastic, which should make them stronger and more durable than the iron pieces.

The new works are also better lit than the originals — with solar-powered lighting system to softly illuminate the horses and the Beltline pathway. The horses’ silhouettes will also show up better at night.

Not coincidentally, the pathway over Yonge has a long connection with horses. Horses and buggies originally used the trail.

Later, rails were laid along the bridge to accommodate trains, also known in their steam engine days as “iron horses.” 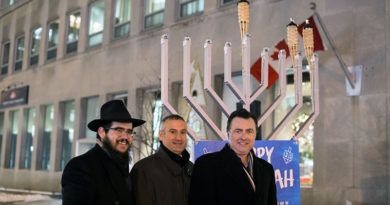 December 14, 2017 Streeter staff Comments Off on Menora lighting a first at Davisville 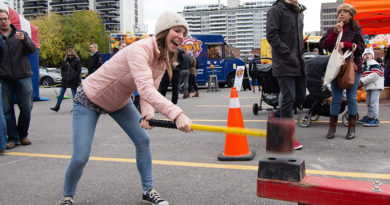 A bit of rural life in the heart of Toronto

October 15, 2018 Eric McMillan Comments Off on A bit of rural life in the heart of Toronto