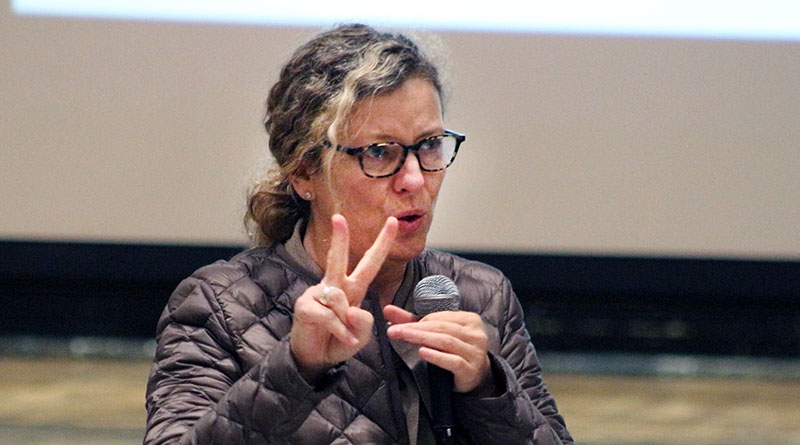 Building a 12-storey rental building on Erskine Ave. would be a small project compared to others in the area, but that doesn’t mean it’s responsible development, Ward 25 councillor Jaye Robinson says.

The building at 55 Erskine Ave., planned for a lot between a 20-storey rental apartment building and St. Monica’s Church, would front onto Broadway from the original 17-storey building that faces Broadway. It would add an additional 147 units.

Speaking to a small crowd at a public consultation meeting on Oct. 25, Robinson said, “I’m beyond furious about what’s happening in this neighbourhood.”

The proposal for 55 Erskine contravenes the vision of Midtown in Focus, the inter-divisional initiative led by the City Planning Department, she said. She also said she is concerned further development in the Apartment Neighbourhood designated lands in the Yonge-Eglinton area is going to increase the burden on waterworks.

Later, Robinson told Streeter the project may pale in comparison to other Ontario Municipal Board-approved projects, but still raises many concerns for her, especially given the sliver of land it’s to be built on.

“It’s not about what’s good for the neighbourhood. It’s about massing,” she said. “That’s not what we’re about. If this is approved, and I hope it isn’t, it’s going to look really reckless. It will be a dog’s breakfast.”

The property is currently owned by Victor Lopez and architectural firm Martin Simmons is taking the lead on the design.

Principal architect Patrick Simmons told the meeting he felt the project was a modest proposal for the site, which is currently functioning as a parking lot.

Owner says excited to provide affordable housing in the area

“We want to let the community know what’s coming,” he said. “We’re here to educate them and let them ask us questions.”

Lopez told Streeter he is anticipating growth in the neighbourhood from the new plan.

“I’m very excited to see this through. It’s a long time coming, having to put up a residential building, to have people being able to afford to live in the area,” he said. “We love the area and all of our investments are long-term.”

Preliminary issues the city divisions have pointed out in August include conformity to the official plan policies, Built Form policies and Apartment Neighbourhoods policies; conformity with the Yonge-Eglinton Secondary Plan; the appropriateness of a tall building on the site; overall height, massing and density; separation distance between the proposed building and adjacent buildings; provisions of on-site parkland and many more.

For Robinson, the ideal outcome would be the property converted into greenspace for the neighbourhood. There is already increased demand on infrastructure from the libraries to the schools to transit to watermains.

“There is a serious deficit of greenspace,” she said. “It’s all buildings and pavement. We’re ripping down buildings to put up taller buildings. We need some public realm, some greenspace and streetscaping.”

Community gets to sound off on development

April 14, 2015 Dan Hoddinott Comments Off on Community gets to sound off on development

July 13, 2011 Town Crier staff Comments Off on Your city needs you to join a committee