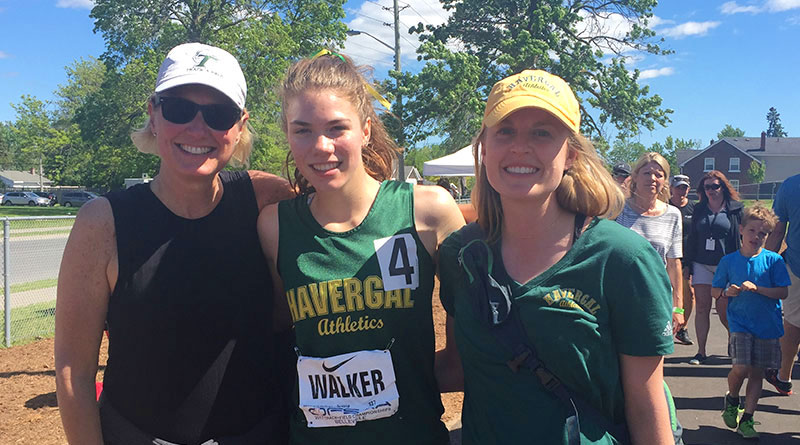 Martha MacDonald didn’t know whether she was going to be competing at OFSAA this year with Havergal’s track and field team.

The Grade 12 student was just coming off a 32nd finish at the IAAF U20 World Cross Country Championships in Kampala, Uganda, and she was experiencing discomfort in her leg.

“I thought I fractured my tibia. I thought I had a stress fracture. I had to cross-train for a bit,” she recalled in a mid-June phone call. “I’m really happy that I ran my senior track season, for sure.”

The senior was the anchor of a team that performed well at the provincials June 1–3 at the Bruce Faulds Track and Field Complex in Belleville.

And with her efforts in the training room, there came success at OFSAA with a silver medal in the 3,000-meter with a time of 9:36.65, just a second and change short of her friendly rival, Sevanne Ghazarian of St. Benedict Catholic Secondary School in Cambridge.

With MacDonald was the future lead of the team, junior Haley Walker, and the two proved to be the alpha Gators of the squad, coach Hilary Adamson said.

“It’s been great having the two girls on the team. They’ve been leaders,” she said. “We had two other girls go to OFSAA this year and look up to them.”

Walker’s challenge at OFSAA was competing with older girls in her heats, including teammate MacDonald in the 1,500.

Her day started out well in the prelims, finishing first and qualifying for the final heat with a time of 2:11.56. In the final she finished fourth, only 40 milliseconds of her first run. Lawrence Park CI student Aurora Rynda won the gold.

“The older girls were really tough,” Walker said in a phone call. “I knew it was going to be a little harder.”

The other two track members making the voyage to Belleville were Madeleine Hall and freshman Antonia Knoth.

MacDonald finished fourth in the 1.500-meter, while Walker was sixth. MacDonald will be travelling to Washington, D.C. in the fall to become a Hoya at Georgetown University.

“I’m just excited for the change, a different setting,” she said of the new adventure. “I’m up for the challenge, so it should be really fun.”

Blue skies for Oakwood basketball in 2017

July 6, 2016 Brian Baker Comments Off on Blue skies for Oakwood basketball in 2017