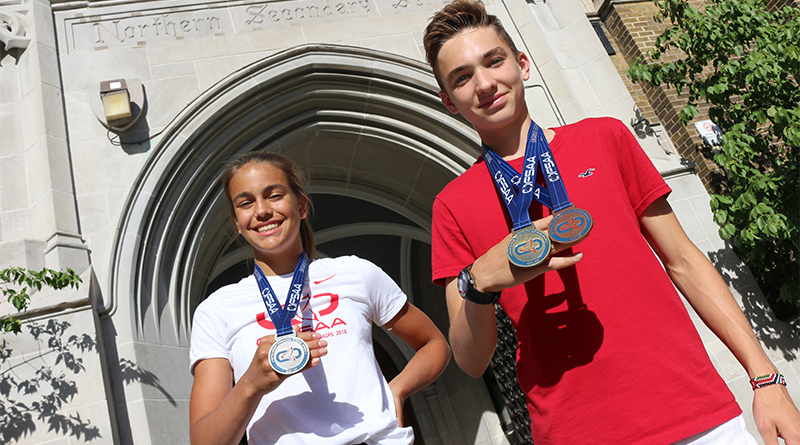 Northern’s track and field future is looking bright and shiny with the team’s results at OFSAA in early June.

“It draws interest in the sport,” he said, in a mid-June phone conversation. “The Grade 9 success draws more attention to the sport. Grade 10s will say, maybe I’ll do that next year. It’s a beacon to the incoming Grade 9s that, ‘Hey, I could do that too.’”

During the spring, students in the land of Red, Yellow and Blue, have their choice from soccer, rugby and ultimate frisbee. Often times, they’ll cross over and compete with the track team as well.

He’s been training for four years out of the University of Toronto’s Track Club and has aspired to win an OFSAA medal since he was in Grade 8. He set a South Region best this season. Though he’s a middle-distance runner, thus the bronze in the 1500, he had a plan on how to win gold from fellow UTS athletics teammate, Roman Mironov.

“I knew what to expect from the other racers,” he said. “The person who finished second has been my biggest competition. My plan was to stick with him and save enough to kick it in at the end.”

As for Skipp, who is also a member at U of T’s Track Club, she made the jump from gymnastics into pole vault. Her best result was 2.9 metres. She finished second to another Torontonian, Isabelle Hill of Humberside Collegiate.

“It was my first year doing, it so it was a big accomplishment,” Skipp said. “I was a competitive gymnast for eight years.”

For her, Canadian Olympian, Alysha Newman is a role model.

“[Pole vaulting] is something new. There’s a challenge every practice. We have something new to work towards,” Skipp said.

The duo will be back next season looking to improve on their 2018 results.

Game over for winter sports

March 4, 2013 Town Crier staff Comments Off on Game over for winter sports