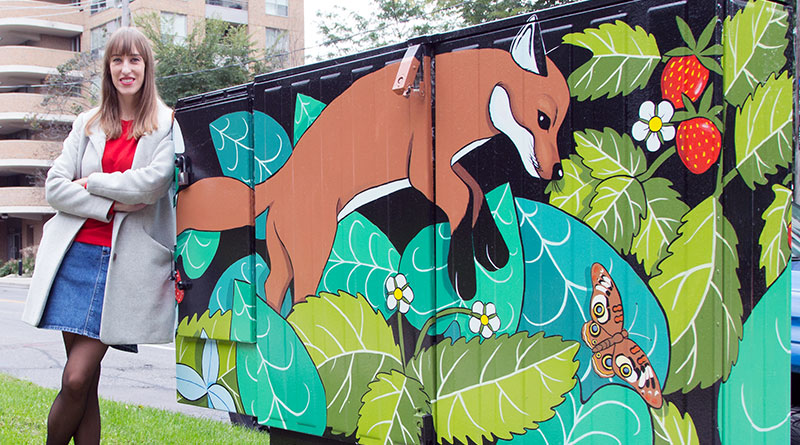 It started with a simple tweet. Michael Cavanaugh posted a picture of a painted Bell box by Sarah Cannon on Davisville Avenue, not far from Mt. Pleasant Road.

It was a fox with a stem of strawberries in its mouth. The colours jumped off the box and the pattern of strawberry flowers gave a sense of the old textiles. I retweeted it, naturally. I mean, I dig foxes and animals, in general, so the art caught my eye.

Then, while on a walk to another job, I came across artist Ghazaleh Rastgar feverishly painting a box at Soudan and Dunfield avenues right behind a construction site.

I inquired how she became involved with painting a Bell box in midtown Toronto. Primarily, she said, it was getting her outside, doing what she loved — the aforementioned lifting of the brush and applying her medium of choice.

“I also love that I’m creating something that can be seen by any passersby, interpreted differently (or not) and something that will be there for 10–20 years or even more!” Rastgar followed up in an email. “It’s my contribution to my city.”

The thirty-something artist, who hails from Toronto’s Little Italy, is one of many who have been recruited by Cavanaugh to beautify the city in a great program called Bell Box Murals Project. She painted two murals this summer.

I caught up with Cavanaugh to get the background on the mural project. The idea was born while he was doing charity work for 6 St. Joseph House back in 2009. The managers of the neighbourhood centre approached him with a mission. The local residents’ association had received a grant from the City of Toronto to paint boxes.

“There was a great response from the community. I was experiencing it too,” Cavanaugh says. “I was thinking, there was so much appreciation, but then I realized it wasn’t just the art per se but the beautification of the street.

“I went to Bell, and asked them, ‘Do you mind if I pursue this over the winter for next year? They said, yes, but it’s not a Bell project.”

In those 10 years, his team has painted 305 murals in 36 communities. Although most of the work is centred in Toronto, he’s also had requests from Ontario communities such as LaSalle, Richmond Hill, Essex and Whitby.

When recruiting artists, preference is given to those who reside in the community.

“It’s not the usual top-down program. We’re looking at the artists there. There’s a very strong sense of ownership.” Cavanaugh says. “That’s really, to me, the real strength of the project.

“It’s not just a bunch of people in the community painting the Bell boxes.”

Funding for it didn’t start until 2012, when he was able to “cobble together partnerships” with multiple organizations, including Enterprising Non-Profits Toronto – Centre for Social Innovation.

Here in midtown, it’s certainly a colourful highlight to the network of residential streets. I even found Councillor Josh Matlow tweeting about them. And there’s no need to worry about graffiti defacing the work, as Bell will seal the art with an anti-vandalism spray.

Rastgar is happy with the results of her installation at Soudan and Dunfield avenues. And she hopes it, along with her other projects, will help dispel the grey clouds of winter.

“Passing by a colourful piece of artwork can improve the mood through imagery and colour. It also causes the passerby to perhaps take a pause while on route to wherever their next busy destination is and to have a look at someone else’s world through pictures,” she wrote. “From my experience, children take the most out of these boxes. They love to see colours and pictures and this could act as a bonding opportunity through questions and conversation with other family members.”

That’s inspiration I love to see called out. 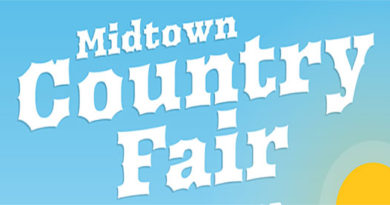