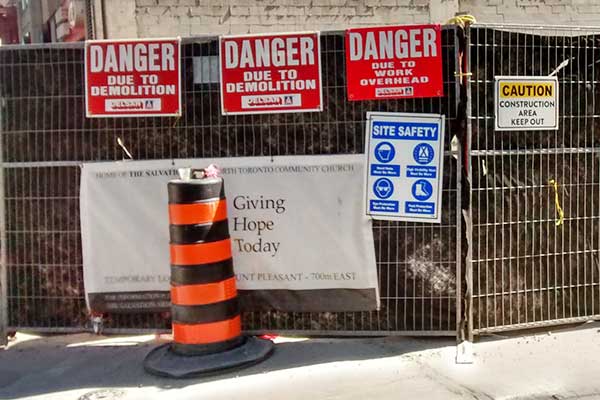 The look and feel of Yonge and Eglinton has been changing drastically for several years, especially with respect to the never-ending construction of condominiums.

In years past, students and young people moving out on their own for the first time were only too happy to rent an apartment at trendy Yonge and Eglinton. Now, it’s more common for singles and young couples moving to the neighbourhood to go directly into a condo, often due to financial assistance from parents.

One of the biggest high-rise condo projects in the past four to five years — the E Condos at the northeast corner of Yonge and Eglinton — will be 67 stories high when completed. While it will cram in a lot of people, it will also take away more sunlight from the neighbourhood. Noise from the work has been relentless, sometimes even on a Saturday morning. Despite that, the condo site manager says they “try to give [us] a break on weekends.”

Over on Eglinton and Dunfield Avenue is the much anticipated completion of the 33-storey Madison. Move-in date is mid-October, coinciding with — to the excitement of many area residents — the opening of Loblaws on the ground floor.

Some residents and business owners alike have been feeling the impact of the condo construction more than others. Bumyoung Han, owner of convenience store Sun Smoke, started the business with his wife in 1997 in a small strip plaza on Yonge between Orchard View Boulevard and Helendale Avenue. Years back, profits were better. Still, fortunately business is good enough for now, even though it is “very hard to survive.”

As for the rest of the abandoned strip plaza just north of Sun Smoke, it is now closed in order to build yet another condo. The boarded up space looks like a ghost town. Thach Thai, owner of Hollywood Diamonds, who had been in business in the plaza for 28 years, was forced to move to a second floor location across the street this past July when his lease expired.

Although at first Thai was not happy about moving, many of his regular customers are still coming to his new location. In the long run, the condo construction doesn’t affect him too much. Many of the store owners in that same strip mall were not able to find anything affordable and had to move out of the neighbourhood.

Terry Grogan, manager at local BMV Books near the northeast corner of Yonge and Eglinton, says he wouldn’t want to open a business now but since they have been in the neighbourhood for nearly two decades, they are “about as established as it gets.”

According to Grogan, the rest of the block between Yonge and Roehampton is not a prime redevelopment area, as there is a seven story height restriction for that block. Still, years after nearby condo construction began people continue to ask him when the building will be torn down. Grogan assures them BMV is “not going anywhere.”

Just a little farther south down the block at local pub Duke of Kent, according to manager Kiaya Redgate, business is still faring well. The Duke has had “quite a few regulars since Day 1” when it opened in 1977. Some people don’t enjoy sitting on the patio due to excessive noise and dust from construction of nearby 30 Minto Roe, but other than that, business is actually busier.

Not so for nearby Sugar Mountain, which planned to close by the end of September.

Yonge-Eglinton residents are also noticing the change to the neighbourhood, especially those who have lived here for many years. Long-time area resident Sylvie Besnard says walking around Yonge and Eglinton “used to be very pleasant but with all this construction, walking in the neighbourhood is now almost like a chore.”

She now often takes a detour down one of the side streets, even if it takes longer.

Not all renters want to buy

Although many former apartment dwellers have since purchased condos, not all renters are want-to-be home owners. Tim Kachurov has experienced both renting and home ownership at Yonge-Eglinton. After living in an apartment in the neighbourhood for many years, Kachurov purchased a condo at Eglinton and Redpath, where he was happy for five years. That was until more condo construction on nearby Soudan Avenue took away the view he had previously enjoyed.

Kachurov sold his place because he “didn’t want to risk depreciation in value of property.” If he had hung onto it, he feels it might have been harder to sell. Since then, he has experienced more financial freedom. His current rent is half of what he used to pay for his mortgage, taxes and maintenance fees.

Kachurov says aesthetically, Yonge and Eglinton “is getting uglier and uglier” with the rise in development. In his opinion, “architecture must satisfy the aesthetic and spiritual needs of society”.

The City Planning department at the City of Toronto, however, is enthusiastic about the changes at Yonge-Eglinton. “The City’s ongoing planning study, Midtown in Focus, … addresses topics that matter to people in Midtown.

“The ongoing construction of new residential towers, retail complexes and office developments is matched by public investment in the Eglinton Crosstown LRT.”

This, the City feels, will contribute to the growth of our dynamic neighbourhood’s special character. 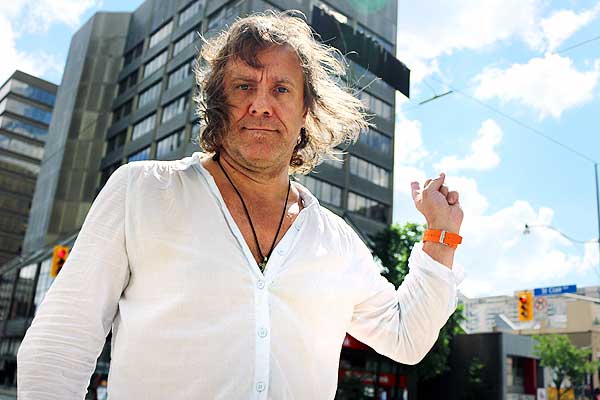 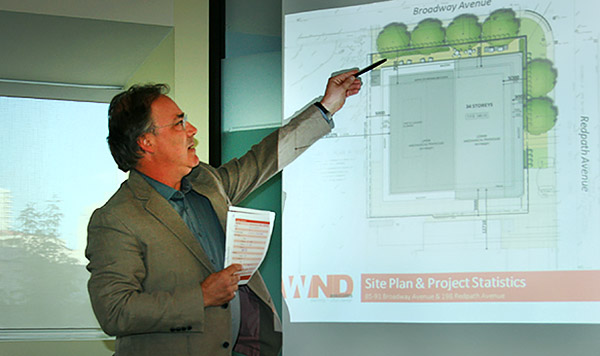 Third time’s not the charm for Redpath developer

July 2, 2015 Eric Emin Wood Comments Off on Third time’s not the charm for Redpath developer