It seems Ontarians are not looking forward to looking at their hydro bills this winter, according to a recent survey conducted by Direct Energy.

“Fifty-six percent of Ontario homeowners said that they’re either very concerned or almost angry about their upcoming winter bill,” said Derek Brown, manager of Direct Energy’s eco-energy assessment. “It was really that stat that really drove us to come up with some simple tips that a homeowner can do (to conserve energy).”

If homeowners are getting heated about the price of hydro Brown said there are several ways to cool their costs.

The average Ontario household, he said, could save as much as $500 a year, or 25 percent, on their energy bills by switching from a 15 to 20-year-old conventional furnace to a newer, more energy-efficient model. He also recommended having a home energy assessment done to determine exactly where cost-cutting conservation measures could be taken.

Provincewide, the Ontario Power Authority has offered to pick up any old or extra fridges.

“A number of people have an additional fridge or freezer running in their basement or garage and that accounts for about $125 a year in electricity minimum, especially if it’s an older fridge,” said Toronto Hydro spokesperson Jenny Link. “So if you have one you can contact the Ontario Power Authority to have that picked up.”

On the utility’s website and Facebook page a coupon booklet is available filled with discounts on products such as dimmer switches and compact florescent light bulbs.

“They expire at the end of December so we’re trying to definitely push those coupons now and make sure people get an opportunity to take advantage of them,” said Link.

To promote its initiatives, Toronto Hydro enlisted the help of some well-known Torontonians, including police chief Bill Blair, Ward 33 councillor Shelley Carroll, MP Dan Harris and contractor and television celebrity Jim Caruk to appear in online videos showing viewers some of the conservation renovations they have done on their homes.

Caruk founded the Caruk Group, a homebuilding and renovation company, and also stars in the shows Real Renos and Handyman Superstar Challenge on HGTV. He said simple steps can be taken to reduce energy consumption and, in turn, your energy bill.

“If you have a pool you set your pool pump and your pool heater on a timer so it’s not running all the time,” he said. “I did that this year with my own pool. I saved, over the course of the summer, probably two or three hundred dollars.”

While things like setting a timer cost very little, major conservation renovations such as installing solar panels or geothermal heating can be very expensive, but result in higher long-term savings. As a contractor, Caruk said the number of clients who ask for green technology on or in their homes comes in waves and is dependant on the economy.

“If people got extra money then they’ll go the extra step,” he said. “If they don’t then they’ll just stick to conventional ways and that’s the problem we’re having with this stuff right now.

“We need to somehow get the prices down more or get more rebates from the government to keep fueling this.”

Give your clematis a ponytail

June 18, 2012 Town Crier staff Comments Off on Give your clematis a ponytail 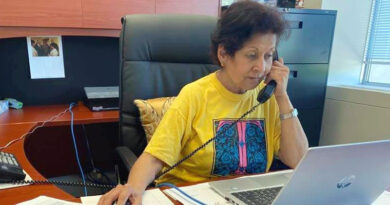