The Annex Summer Night Market brings together artisans, artists and vintage vendors, poets and musicians in a good cause at the Tranzac Club, 292 Brunswick Ave., on Aug. 29 and at Trinity-St. Paul’s United Church, 427 Bloor St. W., from 5 p.m. to 11 p.m. on both evenings. See more in the Things To Do listing.

As the date of their return is pushed back once again, residents evacuated from their Parliament Streets apartments in August 2018 held a candlelight vigil last night. It was attended by Councillor Kristyn Wong-Tam and Mayor John Tory, who both spoke in support of the residents.

See more details and photos in the news section.

More than $25,000 and a dozen musical instruments have been donated to the Cabbagetown Community Arts Centre since it was cleared out of instruments and equipment on Monday. A GoFundMe page was set up with a goal of $20,000 after the break-in that left the centre’s program of training about 200 local kids in music, theatre and art in jeopardy and left organizers devastated. Read the full story.

‘Theft’ of dog all a misunderstanding, police told

About noon hour yesterday, police issued a press release about the apparent theft of a dog from in front of 60 Carlton St. on June 12. A man and woman were seen approaching a four-month-old, white and black, husky puppy that was tied to a post while the owner of the puppy was inside the store shopping, then untying the puppy and leaving with it. Descriptions of the individuals were disseminated.

But by 9:36 p.m. yesterday, police issued another press release thanking the public for assistance in identifying the two but reporting the dog’s owner advised them the pup had been returned and “it was a misunderstanding.”

We guess we really have hit the dog days of summer.

Musical instruments and sound equipment used to teach kids music, theatre and art were cleared out of the Cabbagetown Community Art Centre during a break-in on Monday. The robbery puts in jeopardy the 40-year-old program that trains 200 students from the St. Jamestown area weekly. Read the full news report.

After years of construction and a one-month delay due to weather, the city yesterday reopened College Park yesterday, which it dubbed an “urban oasis.” See the full story on the unique park and its reopening.

Thanks to promising weather, College Park at 420 Yonge St., will be officially reopened on July 10 amidst fanfare. The event was originally scheduled for June 5 but was cancelled then due to inclement weather, according to a city press release.

Mayor John Tory will be joined tomorrow by councillors Mike Layton and Kristyn Wong-Tam and the Downtown Yonge BIA for the event beginning at 4 p.m. The revitalization of the outdoor park will also be celebrated with performances by Circus Jonathan, Whiplash, Greg “Not Bad at All” Tarlin and the school board’s Pink Titans Robotics, along with face painting and a farmers’ market.

Four months ago a woman was sitting studying in a coffee shop at Yonge Street and St. Clair Avenue when she was shoved and robbed. She gave chase but the robbers got away — except for photos taken when two men used her stolen bank cards at a nearby convenience store. Now police have released images of three people in their investigation. See the full story and photos.

Screw the kids, spend your money

We don’t know if it’s one of the best productions in the Toronto Fringe Festival, which opens today, but the title alone is a grabber. Spend the Kids’ Inheritance runs from July 4 to 14 during  the festival at the Helen Gardiner Phelan Playhouse on St. George Street. See the listing for more details if this also appeals to you.

Jazz Fest kicks off with free concert in Yorkville

Bloor Street will be closed for two days of non-stop music, among among 175 free concerts featured during the festival’s run until June 30. For the Jazz Fest’s schedule visit the website.

• Cumberland Street will be closed between Old York Lane and Bellair Street Road from June 21 at 12 p.m. until June 30 midnight.

• Bloor Street West will be closed between Avenue Road and St. Thomas Street from June 21 at 12 p.m. until June 24, 5 a.m. Only local traffic will be allowed to travel west of Bay Street on Bloor in this period.

• Hazelton Avenue will be closed between Scollard Street and Yorkville Avenue from June 24at 6 a.m. until July 1 at 6 a.m.

Get your sunscreen at two local parks

The 35th Toronto AIDS Candlelight Vigil, celebrating those who have died of AIDS, takes place at Barbara Hall Park, 519 Church St., on June 18 at 9 p.m. This year’s theme is “Yesterday, Today and Tomorrow.” See the event listing for more details.

Bloor Street West, from Avenue Road to Bay Street, is closed to traffic on June 16, for the ninth annual Yorkville Exotic Car Show. Police say the closure will be from 6 a.m. to 8 p.m. The major north-south intersecting streets will remain open, however.

Tour the sites of the village tomorrow

You can still sign up for the Heritage Toronto walking tour of the Church-Wellesley village and follow the footsteps of activists who struggled to find a public space they could call their own. The tour runs on June 15 from 4 to 5:30 p.m. Find out more in the Things To Do listing.

It runs for three evenings through the weekend on College Street. Enjoy the food, try the wine, enjoy the performances with a taste of Italy. See the Things To Do listing for more.

Police have charged a man with assault and administering a noxious substance, three days after a family strolling on Clinton Street near Bloor Street on June 6 allegedly had a corrosive substance thrown at them. They had been approached by a cyclist who threw a bottle at them, causing minor injuries, before he fled “screaming and yelling,” according to police. A man was arrested and charged on June 9. Read the more detailed report.

A man, 24, has been arrested following the death of a 52-year-old man on Yonge Street near Charles Street (see previous item). Eric Bryant Ram of no fixed address has been charged with second-degree murder. He is scheduled to appear in court this afternoon.

Man killed at Yonge and Charles

A man, 52, died in hospital after succumbing to injuries received in an attack on Yonge Street, near Charles Street, early on June 8, police report. Officers were called to the scene at about 12:14 a.m. and found a seriously injured man who was then taken to hospital. Investigation showed he had been standing by the main door of 730 Yonge St., when he was allegedly attacked by another male who fled the scene on foot. It is undetermined whether or not the suspect and the deceased were known to each other. Dead is James Andrew Smith.

The official opening of the revitalized College Park at 420 Yonge St. this afternoon has been postponed due to expected inclement weather, the city announced today. Mayor John Tory and local councillors Mike Layton and Kristyn Wong-Tam were to open the park amid a celebration including musical performances, face painting and a farmers’ market. No new date for the opening has been given yet. 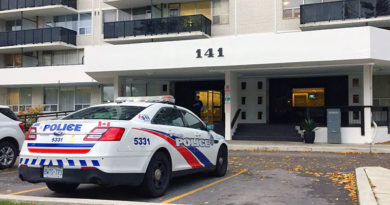