A witness to the shooting of Delano Coombs on May 10 cites a rap song to indicate he’s willing to tell what he saw — a reversal of the usual scenario.

According to outspoken crime victim advocate Kemi Omololu-Olunloyo, rap and hip hop usually lead people down the opposite path, ensuring they don’t snitch.

“Our streets are very musically, hip hop-themed and it goes with the program: don’t snitch. That mentality is there for them as young as 10, 12 years old,” she said. “The black streets of Toronto are coached never to snitch.”

She got some firsthand experience when she was rebuffed while trying to hand out Crime Stoppers[/url] cards to bystanders in the hours after Coombs was killed.

“When they said ‘we don’t need you’ that’s when I walked off,” she said.

Omololu-Olunloyo is used to dealing with people who don’t like police and don’t like Crime Stoppers. And because of her advocacy work, she’s not only collected Crime Stoppers rewards in the thousands, but she’s helped convince people to turn themselves in.

Dealing with many youth in various communities in Toronto has given her an insight into crimes in Toronto.

As a result, Omololu-Olunloyo said she has reason to believe some of the unsolved homicides that have plagued Cooper Mills in the last few years are related.

In the past three years, there have been eight killings in the immediate area and at a nearby strip of apartments.

Jarvis St. Remy, 18, was shot and killed outside Cooper Mills while waiting for a bus on May 1, 2009. Ten days later 14-year-old Adrian Johnston was shot to death in a hydro field behind homes on Eileen Avenue, just north of the complex. Neither case has been solved.

Antonia Catherine Zammit was then found dead Dec. 14, 2009 in her apartment across the street from Cooper Mills. Her son was arrested and charged in her murder.

On Christmas Day 2010, there was a driveby shooting at Cooper Mills that wounded a teen. Only a couple hours later, 18-year-old Jordan Hosten was gunned down in a fourth floor hallway at 200 Woolner Ave. His murder has not been solved.

Then on March 2, 2011, Shane Williams was killed after stepping off a bus across the street from Cooper Mills. His murder has also not been solved.

At a community barbecue inside Cooper Mills on Aug. 27, 2011, Jermaine Smith, 28, was shot and killed in front of anywhere from 150–200 people. To date, police have not solved his murder either.

Then in April this year, Jaivoan Cromwell was shot to death at 220 Woolner Ave. A young offender was arrested and charged with his murder. A few days later, there was a driveby shooting on nearby Bernice Crescent that wounded a teen.

Finally, on May 10, Coombs was killed inside Cooper Mills, not far from where Smith was murdered.

Det. Sgt. Wayne Banks is lead investigator on the Smith and Coombs cases. While Omololu-Olunloyo said she believes all of the information given to her by members of the public, Banks said it’s his job to be skeptical of it.

“It hasn’t been unusual for people to say things to the media or the police to try to throw us off course because every bit of information we get, we have to investigate,” he said. “Somewhere down the road, if an arrest is made, it could be challenged in court, as ‘Detective, you got this information through Crime Stoppers or a tip — what did you do about it?’

“If we sit there and say ‘We did absolutely nothing,’ then it shows we’ve done an inadequate investigation. So we have to look at every bit of information that comes in.”

Though only a handful of people came forward with information from the Smith murder despite the number of witnesses, Banks said they’ve been getting good support from the community in the Coombs case.

“With the most recent murder at 4020, we can’t say for sure how many people were home or how many people may have been out at that time of day or watching from windows, but we have had quite a few people who have come forward,” he said.

Banks also said he has had case conferences with detectives investigating other homicides and shootings in the area and at this point he doesn’t see any links between his cases and the other murders.

“We haven’t been able to come up with any kind of link that would say one is directly related to another or that there’s a possibility of the same people of interest,” he said.

As for the Coombs case, he said investigators are still examining all possible leads.

“If witnesses come forward, give descriptions and help police, we have a far better chance of catching these people,” she said. “If you don’t have witnesses, police have their hands tied.”

Doucette said she was aware of the Coombs murder within five minutes of it happening because she often liaises with the Toronto Community Housing staff at that location.

Following the murder, Doucette received several communications from area residents that shook her.

“I received tweets from people saying ‘Why haven’t you done anything? Why are you letting this happen?’ and that hit me hard,” she said. “I have a 22-year-old son, and I texted out to him and just said ‘I love you.’ ”

In fact, Doucette says she has been trying. Last fall she held a community meeting for those in Cooper Mills and the nearby Warren Park neighbourhood. She said the first question was about whether or not Jermaine Smith’s killer had been caught yet.

She had to say no but police were doing everything they could. She also reiterated the need for the community to step forward to help solve these crimes.

Nobody knows this better than Clemee Joseph, whose son Jarvis St. Remy was shot to death at a bus stop outside Cooper Mills on May 1, 2009. His killers have never been found.

“I’m waiting,” she said. “I’m hoping that one day I get that call saying that they found whoever killed my son.”

Making things tougher for her is the one of the rumours hinted at by Omololu-Olunloyo has made its way to Joseph. She’s heard many youth in the streets say her son’s killer is already dead. But she says she’s not sure what to make of that.

“Part of me believes it because one of the boys who got shot and killed not too long ago, he was one the police questioned more than once about my son’s case,” she said adding they went to the same school. “The police never told me that, but his friends said the police went to the school and arrested that boy. His nickname was ‘Goonie.’”

It was Christmas Day in 2010 that Jordan “Goonie” Hosten was gunned down in the fourth floor hallway of an apartment building at 200 Woolner Ave.

But with no updates from police, Joseph is not convinced this was her son’s killer.

“I have to go by (what police say),” she said. “If they haven’t called, or they don’t have proof or they haven’t found the gun that was used, then who am I to say he’s the one who killed Jarvis? I don’t know. I wasn’t there.”

Regardless of whether or not the word on the street is true, Joseph is hopeful it’s not.

“There’s news on the street that whoever killed my son is already dead, but I don’t want him to be dead,” she said. “I want to see their faces and ask them ‘why?’ ” 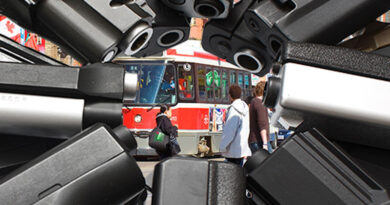 March 24, 2021 Eric McMillan Comments Off on Shootings have doubled over five years, but may be dropping now