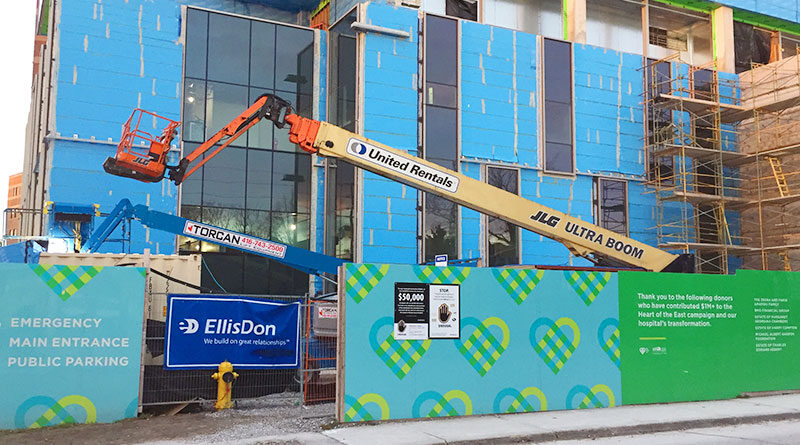 Police have made an arrest in the “hate-motivated mischief and criminal harassment investigation” of two nooses found at an East York construction site in spring.

Police made the arrest Dec. 4, nearly six months after the incident that drew national attention as a possible hate crime.

In the early afternoon of June 10, police responded to a radio call from the construction site for an addition to Michael Garron Garron Hospital at the corner of Coxwell and Sammon avenues.

Workers reported arriving that morning at the site, which was closed to the general public, to find two nooses on their construction equipment.

It was one in a series of such discoveries at construction sites across the city in June and July.

Signs are posted around the construction site offering up to $50,000 reward for information leading to the identification of the “individual(s) responsible for the recent acts of racism.”

Suspect tied to one of the nooses: police

A task force was set up to tackle hate crimes, with members of the Toronto Police’s hate crime unit and investigators from local police divisions, including 55 Division, which covers East York.

Officers working with the task force were able to identify a suspect connected to one of the nooses discovered at the Michael Garron site.

Jason Lahay of Toronto has been charged with three counts of criminal harassment and one count of mischief interrupting the use of property over $5,000.

I hope the charges stick. Its time Canada gets a little more tough, a lot more tough when it comes to hate crimes via written, spoken, implied etc. C.C.C. needs to be strengthen to ensure harsh penalties come with it as well.

Police said charges related to hate speech require the Ontario Attorney General’s consent, in response to the request of investigators, and could be laid later, if applicable.