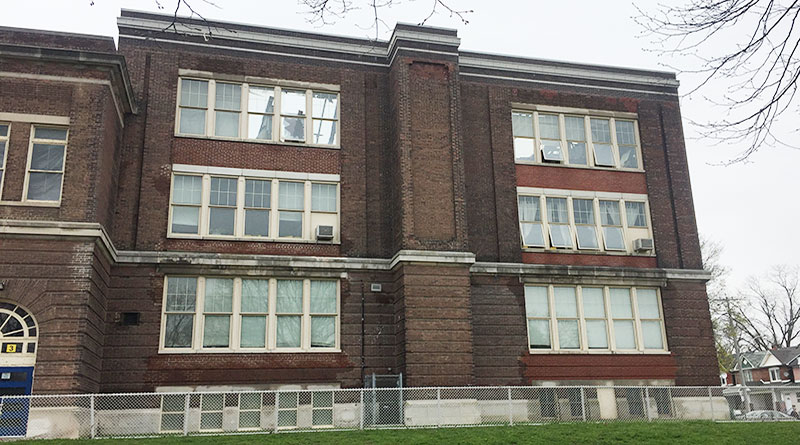 Students showing up for their classes at Jones Avenue Adult Centre this morning were turned away as fire had demolished half their school’s roof overnight.

The blaze broke out Monday afternoon and sent flames up through the roof from the third floor of the school at Jones and Strathcona avenues, south of Danforth Avenue. Emergency crews were called to the four-alarm fire shortly before 5 p.m.

Seven people working on the roof when the fire broke out had to be rescued by aerial ladder, fire chief Matthew Pegg told media Monday evening.

No one was reported injured in the fire.

Pegg called it a “very challenging fire for our crews” and said then the firefighting operation would be going on for an extended period of time.

By 10 p.m. the fire appeared to be under control, although at least seven trucks were still working on extinguishing the blaze.

This is the view from the mast camera display screen inside the @Toronto_Fire command post. You can see the articulating aerial operating at the rear of the building, preventing fire spread. Defensive operations continuing. pic.twitter.com/P7psDhqqxi

By mid-morning today, fire trucks were gone and only school board security guards were on duty, keeping people out of the charred building. Sky could be seen through third-storey windows where the roof was missing.

Crossing guard Mary Shand, working at the Strathcona intersection, said she had to break it to some of the school’s students of English as a Second Language when they showed up for classes this morning.

“There was one lady who came — she was a little woman who doesn’t speak any English and every day she walks past me and she waves at me and every day I wave back, but today I held my hand up to tell her to stop,” Shand said. “I pointed at the ceiling out of the roof … and I said no school and she looked very sad.

“And then she went over to the front of the school to see and then she came back and she looked even sadder.”

Shand said she was sorry to see the school damaged by fire. “To me it’s very sad — it’s an old building, you know.”

The school is closed until further notice, according to the Toronto District School Board.

Learners are encouraged to call 416-395-4982 for information or to visit ESLtoronto.ca for a complete list of classes, location and times.

The fire was the second to hit an educational institution on Monday, as a six-alarm blaze also destroyed part of York Memorial Collegiate Institute in the west end.

The fires do not appear to be connected, according to Pegg. All indications are the fires are “separate and distinct,” he said in a tweet. 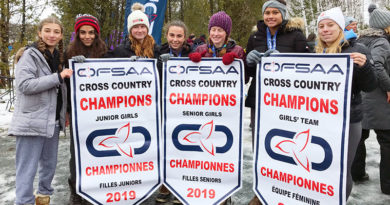