Remembrance Day services are hosted by the city across Toronto at six locations, including in the east end at the East York Civic Centre.

Members of the public are welcome to attend the events in person, as well as view some online, since the provincial guidelines now allow for greater capacity at the services.

The services commemorate those who paid the ultimate sacrifice in the First World War, Second World War, Korean War, peacekeeping and Afghanistan conflict.

Refreshments are to be served in the civic centre after the service. 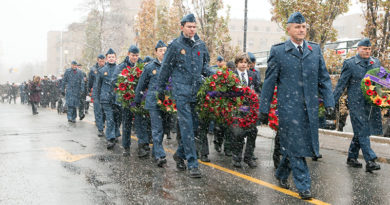 Remembrance in the snow at Sunnybrook