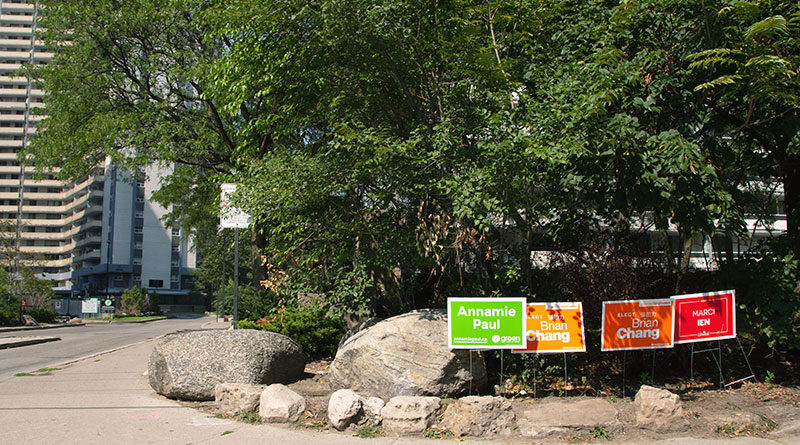 With the Liberal’s sweep of central Toronto ridings becoming an old story, much of the attention has focused on a certain small-party candidate who ended up a distant also-ran.

That candidate is Annamie Paul, controversial head of the Green Party, who was campaigning for the third time in Toronto Centre.

Rising from about seven per cent of the vote in 2019 to a second-place finish with 33 per cent in the 2020 by-election as a Green candidate — and now leading her party — Paul might have been expected to have a chance at unseating Liberal Marci Ien. She spent much of the election campaigning in her own riding.

But Green Party hopes were dashed in the election yesterday when Paul’s share of the vote in Toronto Centre fell to less than nine per cent. She placed fourth, behind not only Ien but also behind the NDP’s Brian Chang and Conservative Ryan Lester.

Former broadcaster Ien, who won the riding after fellow Liberal Bill Morneau resigned last year, held onto the riding in this election with a commanding 50.2 per cent of the vote.

Toronto Centre has now been in Liberal hands continuously since 1993.

Along with its sister riding of University-Rosedale, Toronto Centre is part of the Liberal sweep of Toronto ridings, which has almost become a federal election tradition.

Star Liberal cabinet minister Chrystia Freeland won University-Rosedale with nearly 47 per cent of the vote, well ahead of her New Democratic challenger Nicole Robicheau who drew just 25 per cent.

Elections Canada is still calling the results “preliminary,” as more ballots are to be counted, but Ien and Freeland have unassailable margins.

The results for the two central Toronto ridings as of 10 a.m. this morning:

Freeland tweeted today that she went to Summerhill station this morning to thank voters.

I went to Summerhill station with my husband this morning to thank our #UniRose neighbours for re-electing me as their representative in Parliament! #Elxn44 pic.twitter.com/KUtoThBDtw

As for Paul, she congratulated Ien on Twitter and urged continued aid for the riding during the pandemic.

Congratulations to @MarciIen for her win in Toronto Centre and to all the other candidates who ran to represent this community.

Toronto Centre is a riding that will continue to need help as we emerge from the pandemic and beyond. Hopefully, that support will be delivered.

In a speech to her supporters last night, Paul said she had congratulated Ien directly as well.

“Certainly I am disappointed — it is hard to lose, no one likes to lose,” she said in a 12-minute talk at her party headquarters. “But I am so proud of the effort, the creativity, the innovation that our team brought to this race.”

Fight is on for Toronto Centre

November 5, 2013 Town Crier staff Comments Off on Fight is on for Toronto Centre