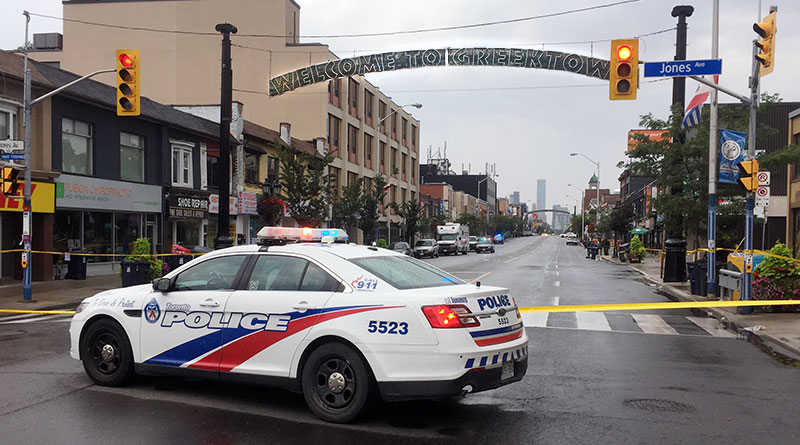 One month after the July 22 shooting tragedy on Danforth, parts of the street were again cordoned off by police following a fatal shooting early Wednesday morning.

A man, identified only as being in his 30s, was pronounced dead on the scene after the shooting on Danforth near Langford Avenue at about 2:30 a.m., police say.

Police have reportedly arrested a man and are searching for a possible second suspect.

Police blocked off the street between Pape and Jones avenues, the eastern end of the area known as Greektown, diverting westward rush-hour traffic south on Jones this morning.

This is further east than the section of Danforth affected by last month’s tragedy in which three people died, including the shooter, and 13 were injured.

These incidents as well as other recent crime on Danforth have left some local businesspeople worried about safety in the area.

“I’m so scared,” says Wendy Weng behind the counter at a variety store at Danforth and Jones, just outside the police tape. “Now there are so many crazy people.”

She and her husband have owned the store for more than 10 years, but have suffered three robberies at knife-point, as well as thieves coming in to steal all their newspapers to sell elsewhere, she said.

Today’s shooting and other recent violence on the street frighten her, especially when she is working in the store.

A customer entering the store during the interview added a comment about crime on the street: “It’s disgusting. And it’s getting much worse.”

It’s getting very hard to make money due to the crime, Weng said. “Prices go up and profits are much less.”

December 20, 2010 Town Crier staff Comments Off on A kid's paradise on the Danforth

February 9, 2011 Town Crier staff Comments Off on Park to be renamed for fallen officer