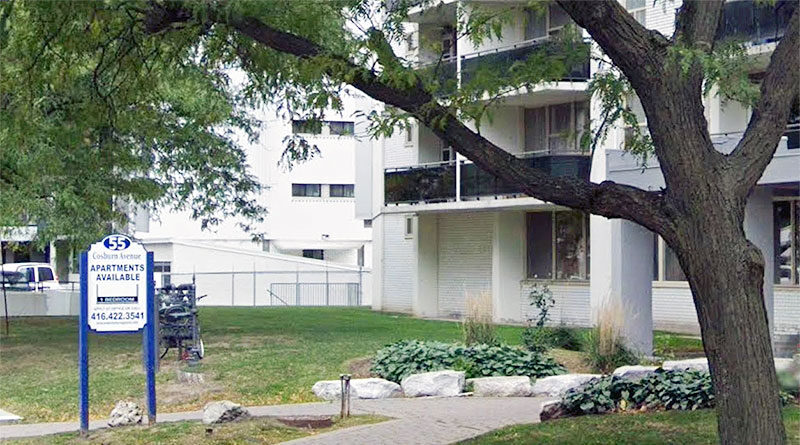 Apartment rents in Toronto have fallen during the pandemic, with many neighbourhoods experiencing drops of 23 to 39 per cent from last year, according to a recent survey.

The first three months of this year are shown continuing the downward trend set over last year, although the indications from the fourth month are rents may be finally levelling off, even beginning to climb a bit again.

Figures from TorontoRentals.com show the city’s 10 communities with the biggest drops in condominium and rental apartments during January to April of this year compared to the same period a year ago, are:

It should be noted that some of these are among the city’s neighbourhoods with the highest rents to begin with, so they might have had the furthest to drop. But the decreases seem to have taken effect right across Toronto.

The community with the least change in its rents is High Park North, which still registered a 3 per cent decrease.

For Toronto as a whole though, last month showed a slight uptick after more than a year of falling rents. The average rent across Toronto for April was $2,004, up 0.9 per cent over March.

This places Toronto in the middle of the pack for the Greater Toronto Area.  With average rents at $2,136 in April, Vaughan had the GTA’s largest increase —nearly 10 per cent. With a $1,690 average, Richmond Hill had the lowest change in April, registering a 5.7 per cent decrease.

Most and least expensive neighbourhoods

Within Toronto, the highest average rent for the first four months of this year was registered in Rosedale-Moore Park.

Here are the top five neighbourhoods for apartment rents in the city, according to Toronto Rentals:

And here are the lowest five:

Bullpen Research and Consulting, which carried out the survey for Toronto Rentals.com, concluded rents are expected to pick up in the fall, but a rapid rise will not happen until until 2022 when Canadian borders are reopened and university students return to classes.