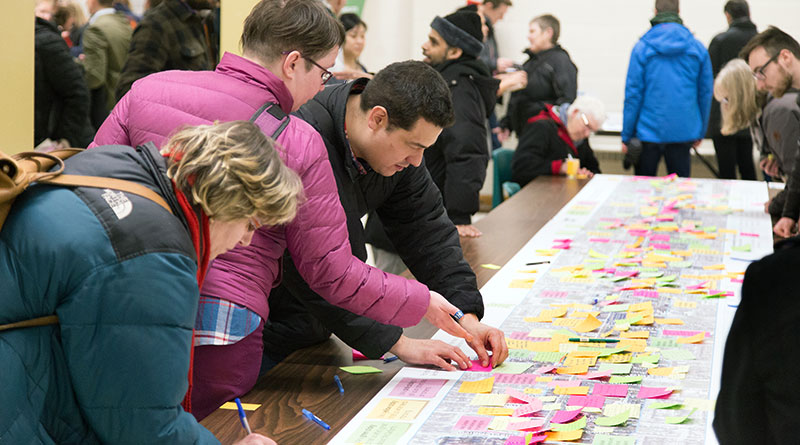 After the first open house introducing the Danforth Study in November, city staff got the message about bike lanes.

Local opinion erupted at that meeting both for and against them.

But the city heard people wanted to see a pilot project on part of Danforth Avenue before a decision was made about permanent bikes lanes on the six-kilometre stretch, said Jacquelyn Hayward, director of project design and management in transportation services, in an interview at the second open house on Jan. 27.

The proposal for a pilot project was part of the material presented to the more than 200 local residents, workers and businesspeople who showed up at Monarch Park Collegiate to give feedback on the developing plans to improve Danforth.

“We’re going to be looking at a pilot project for a complete street design or a bike lane design on the Danforth,” Hayward said. “It wouldn’t be the full six kilometres from Broadview to Victoria Park, it would be a shorter segment of the street in-between there, up to two kilometres.”

Residents were being asked at the meeting what segment they thought most appropriate for the pilot project and how it should be designed.

The city has also hired a consultant for a safety review of the entire six kilometres, especially looking at collisions involving drivers, cyclists and pedestrians to see how to make it safer. The consultant was at the lope house to talk to local people about the issue.

The meeting presented the city’s revision of the Danforth Study as a whole since getting feedback from residents at the first open house.

“Tonight we have made made some updates on our study scope and we’re telling them what we’ve heard,” Hayward said. “So we’re reflecting that back to make sure we got it right.”

Maps of the Danforth area were set up on tables to invite people to provide more more detail about what they don’t like or would like to improve along the street, including where to improve safety, increase density, or fill in gaps in stores.

The city was also carrying out a survey on how to support businesses on Danforth.

“People love the Danforth,” Hayward said. “It’s a unique retail environment and we want to make sure we keep that and we improve that — and we don’t impact that in a negative way.”

She noted people had been telling them that cultural events held along Danforth and health services available are as important to retain as retail businesses.

The third of six planned open houses on the Danforth Study is expected to take place in spring.

January 3, 2012 Town Crier staff Comments Off on Championship fields on the horizon