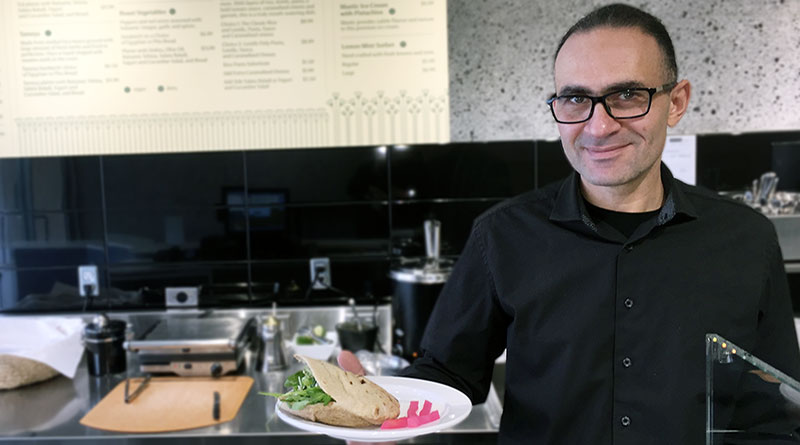 “Eat like an Egyptian” may seem like an odd invocation to make in the middle of Greektown.

But for months last fall those words hung above the papered-over windows of a Danforth Avenue storefront next to a sign for “Papyrus.”

When Papyrus finally opened for business in early winter, it was revealed it had a Greek connection, despite specializing in Egyptian food.

The area was chosen for the new eatery because its philosophy seemed to match the attitudes of the local people, owner and manager Amr Elimam said in a January interview.

It also helped to be near the Big Carrot and health health food stores.

There are other Egyptian restaurants in Toronto but none specializing in vegetarian food, as far as he knows. “My opinion is that vegetarian food is far better than the other types of food we have from Egypt.”

Egyptian cuisine in general differs from other Middle Eastern fare in that Egyptians are very bold about using herbs and spices, Elimam said. Egyptians also tend to use beans as a base. “Lebanese and Syrian food use chick peas — we’re much more rooted in the fava beans,” he said.

The central vegan dish at Papyrus is Ful, made with fava beans seasoned with fresh lemons, limes, olive oil, and aromatic spices, plus fresh vegetables, tehina and umami. It comes wrapped in a sandwich or as part of a full platter.

And that Greek connection? It turns out papyrus is a plant used for making writing materials.

“Actually the origin of ‘papyrus’ is a Greek word for paper,” Elimam said. “So here we are in Greektown.”

'Tis that time again on The Danforth

November 18, 2010 Town Crier staff Comments Off on 'Tis that time again on The Danforth

Flemingdon finally gets a food market

December 9, 2010 Town Crier staff Comments Off on Flemingdon finally gets a food market