The whole thing was my idea.

About 15 years ago I remarked half-seriously to a friend that one day I’d open up my own “Grilled Cheese Emporium.” Everyone (old enough) has had that classic Muskoka experience, at some not so-elegant-diner: grilled cheese on white bread, ketchup, fries, sliced pickle and a chocolate milkshake, with extra milkshake in the mixing tin. It would be my request for a final meal pre-gallows.

Enter Aniko Szocs and Stephen D’Amico. This couple has actually pulled off the stunt for real — here in Leaside no less.

It’s The Millwood Melt, at 902 Millwood Road right beside Star’s Café and Catering, across from that little plaza without a name that accommodates Fix It Again Sam and Sleuth of Baker Street.

Three years ago Szocs found herself with the opportunity to deploy the space, which had been been grandpa’s denture clinic and before that an uncle’s fruit market. With Szocs already an exotic grilled cheese-maker by inclination and D’Amico discovering on the Internet that grilled cheese specialty restaurants were taking off in the U.S., the next step became obvious. The grilled-cheese revolution was ready to storm Leaside.

They both come from teaching backgrounds, eventually opting out to pursue their eclectic interests. D’Amico has even written and published two books on his own form of deep meditation. Of course for some of us, savouring a grilled cheese itself generates a higher form of enlightenment, and Stephen would be hard-pressed to argue the point.

At the Millwood Melt, for a mere $8 (tax included) patrons can experience the Tuna Kahuna, a Green Machine, a Hamelot, the Rise’n Shine, or the special melt of the day. Then there’s the $6 Anklebiter, a cheddar-melt, veggie chips and a pop or juice combo for the kids.

The Millwood Melt possesses all the quirky character that goes completely missing at franchised eateries. As Szocs and D’Amico prepare your meal, you can lounge in an armchair equipped with an HoMedic electric back massager. A Samsung wall-screen shows spectacular slides of deep outer-space, presumably a complement to D’Amico’s deep inner-space. Surrounding the clientele are bric-a-brac, décor touches and artworks galore, all tastefully arranged, including: a long two-man tree-saw, doubtless from D’Amico’s early years as a lumberjack in the wilds of North York (hah-hah), antique coffee grinders, sketches of downtown landmarks by W. J. Coucill, decorative Camembert plates over the doorway to the kitchen, Pinocchio and Peanuts-themed objets, wire-lanterns above the window seating, a skateboard deck with the Melt’s Michelangelo-spoofing logo, and so forth, one wall being painted cheddar-orange, after Swiss-cheese holes proved too daunting. Even the immaculate little bathroom doubles as an art gallery, currently featuring paintings by John N. Inglis.

The premises serve too as a community hub, with a business-card cork-board, a ‘Little Free Library’ full of physical books (an ancient communications app) and notices for local events.

Seating and restaurant hours are limited though—three cheddar-coloured chair-stools along the window, three two-person tables, and a picnic table outside, with hours of 11 a.m.–3 p.m. Tuesday through Saturday. Lots of take-out. Cash-only. D’Amico and Szocs have too many other irons in the fire to take on longer hours. Exercise-wise, they’re about to start cycling to work along the Beltline from their place near Eglinton West and Bathurst. They’d like to be living atop the restaurant, but relatives got dibs on the second storey.

As soon as I asked D’Amico if any grilled-cheese-loving celebrities had dropped in, I noticed a bona fide Leaside celebrity tucking into a grilled cheese — with his mum. It was 13-year-old wunderkind photographer Chris Graham, recently the toast of the local press, sitting within arm’s reach of a display of his own laminated landscape/nature prints, which the restaurant sells for him. 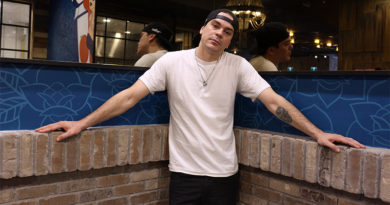