For publicity photos at Forest Hill Village’s new Studio Lagree, fitness models were put through a condensed workout during the shoot.

“Five minutes into it you could see them looking around like what the heck? This is killing me,” Francis Greco says adding two of the models have since signed up to become certified instructors at the facility. “If you do the workout the reaction is the same for everybody irrespective of your fitness level.”

Utilizing a workout on machines developed by Hollywood celebrity trainer Sebastien Lagree, who has worked with Jennifer Aniston, Rebecca Romijn and Hayden Panettiere, the Spadina Road and Lonsdale Road studio is the first to bring the concept to Canada.

The group classes or private lessons are described as a combination of Pilates, strength, core, cardio, circuit training and stretching and are designed to bring people’s muscles to failure — when muscles can no longer move or contract concentrically.

“I took a class with two super fit women and we were all failing on the machines at different levels but when the class was over they came and gave me a high five,” says co-owner Carm Perrelli. “It brings you to failure at different times so an out of shape person can be next to that fitness model. I’m failing at 20 seconds, he’s failing at 50 seconds in.”

Prior to joining forces for Studio Lagree, Perrelli and Greco worked as stockbrokers and investment bankers while partner Pino Gagliardi already owned several businesses. Although Greco had tried the workout in New York and knew how popular it was through instructor and partner Lynde (LA) Russell, it took him awhile to piece together that it was a worthwhile idea to bring the concept to Toronto.

“Here’s the thing. Things that should be obvious to me take forever to sink in,” Greco says. “On one side I tried this incredible workout and watched the place go from zero attendance to you couldn’t find a spot within three or four months purely on word of mouth and on the other I had my two friends saying, ‘Hey do you know any good investment opportunities?’ And literally the light went off and I said, ‘Hey, wait a second.’ ”

Although the workouts are high in intensity, they are low impact and can be modified for people with injuries or during rehabilitation.
“People with injuries can actually engage in a very high intensity workout and not compromise whatever injuries that they have,” Greco says.

Over the next few years, they plan on expanding the studios with up to 10 locations in the GTA. Participating in the workouts themselves, the team says they immediately bond with customers since everyone is finding the workout, which has been called Pilates on crack, challenging.

“As Lynde says people show up looking for Pilates on crack and they quickly realize it’s more crack than Pilates,” Greco says.

November 11, 2010 Town Crier staff Comments Off on Northern gets fit 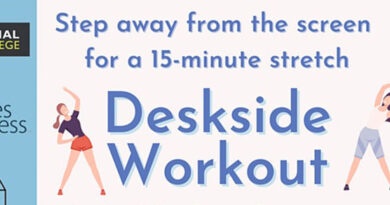 March 23, 2021 Streeter staff Comments Off on Exercise at noon with Centennial students: April 7