A marijuana outlet in North York may have shut its doors for good after Toronto police recently raided the company’s head office on Queen Street East.

“We’re just trying to reassess our situation and figure out the best strategy on a go-forward basis,” said Neev Tapiero, owner of CALM (Cannabis As Living Medicine), a peer-run organization that has been selling marijuana for medicinal purposes for 14 years.

After the Queen Street raid, the North York office was voluntarily closed mostly for safety reasons and under legal advice, Tapiero said, although he wouldn’t elaborate. Even though CALM says it only sells marijuana for medicinal purposes, requiring a referral from a doctor or naturopath, it is not sanctioned by Health Canada, nor do its members necessarily qualify for medicinal marijuana under Health Canada regulations.

Tapiero is currently charged with several counts of trafficking a controlled substance. Although eight other members of the club had been charged as well, those charges have now been dropped.

“The fact that the rest of the charges were dropped I think indicates how weak their case is and I’m extremely confident in our legal position,” Tapiero said. “If anything, this has created an idea in more people’s minds that they should be doing this.”

Health Canada laid out regulations on medicinal marijuana in 2001and made it available to those suffering from serious medical conditions.

Regulations specify that a person who qualifies may either obtain marijuana by getting it from the government, growing it themselves, or designating another person to grow it for them if they are unable to do so themselves. The government deems suppliers such as CALM to be operating outside the law.

But according to Tapiero, patients are ill-served by Health Canada’s system for supplying legal cannabis. He points out that the government only supplies one strain of the plant to patients.

“Different strains of cannabis have different therapeutic values. So one strain that’s good for epilepsy … might not work for somebody with multiple sclerosis,” said Tapiero.

So far, CALM’s North York branch has attracted little attention. The exact location of the store is a closely guarded secret, although the organization’s website lists it as being near Finch Station.

Staff Sergeant Brad Dove of Toronto Police Service’s 32 Division said his division wasn’t aware of the pot shop until the Town Crier called to ask about it.

The lack of attention, Tapiero said, is something he welcomes.

“Most people in the area don’t know we’re there, which is why I don’t want to draw attention to (the North York office),” he said. “You get people saying ‘not in my backyard.’ People have this ‘won’t somebody think of the children’ frame of mind or property values, or community image.”

Tapiero disputed the idea that operations such as his might be harmful to the community.

“I don’t think there’s any negative impact that cannabis would have on the community, but communities will have to get used to it. Medical cannabis is normal,” he said. “People possess it or produce it legally in every town in Canada.

Tapiero said that while his current legal problems do not spell the end of business for CALM, the fate of the North York branch may be tied to the outcome of the charges he faces. 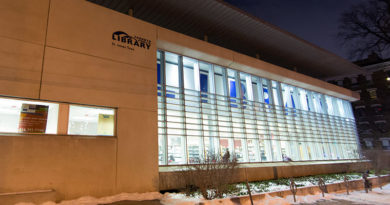