They fought for five years to keep big box retail development out of Leslieville.

That battle was won. But now, a little over a year later, it looks like they’re getting car dealerships instead — a bittersweet outcome, perhaps, for the East Toronto Community Coalition.

Working with a lawyer, local councillor Paula Fletcher and the city, the grassroots group of Leslievillers first took on the fight against Smart Centres, a national mall builder based in Vaughan, when it became clear to them that the development on Eastern Avenue would hurt the neighbourhood.

The new proposal, which won’t require a rezoning application, calls for retrofitting some existing buildings on the former Toronto Film Studio site and the addition of two dealership buildings: one fronting on Eastern Avenue at 3,623 square metres, the other on Lake Shore Boulevard at 2,415 square metres. Eastern is also set to get two 929 square-metre retail spaces under the proposal. According to reports, no tenants have signed on as of yet.

“My first gut reaction was disappointment,” said Tim Kirkwood, a co-chair of the group, after seeing the new plans. “I’m not naïve enough to think they’re going to build a university campus after proposing a retail development, but they could. They could sell the land to another developer.”

The original victory came when the Ontario Municipal Board decided the Smart Centre application didn’t jibe with the land’s official designation as a higher-end employment district.

The other factor that tipped the scales, according to Kirkwood, is city planners managed to convince the board that the plans would have set off a chain of developments similarly non-beneficial to the community.

“I think the thing that really turned the OMB around was a statement by one of the city planners. He said what would happen here would be the beginning of retail contagion much like what happened at the Eglinton and Victoria Park strip,” Kirkwood said.

Often referred to as the Golden Mile, Eglinton and Victoria Park is home to a massive cluster of car dealerships.

Kirkwood said he’s concerned this new development may open the gates for a future go at zoning amendments.

“They’re putting the car dealerships in right now, which may stay, but they (may be) thinking, ‘In time, we’re going to build a major retail development here. We’re going to wait until the winds blow in our favour.’”

When and if that time comes, Kirkwood says he and his community are poised for action.

“This is not going to be the last fight. Our job, and the city’s job, is to ensure that whatever happens has the least negative impact on the community.”

Though it may be an ambitious project to attempt to quash all future rezoning applications here, Kirkwood says he and his community are already on it.

“The city has to address it as soon as possible … We have to shut the door on that stuff and insist that the city focus on (building better things).”

Smart Centres was unavailable for comment at press time.

June 6, 2012 Town Crier staff Comments Off on Getting political 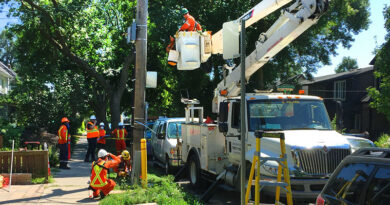