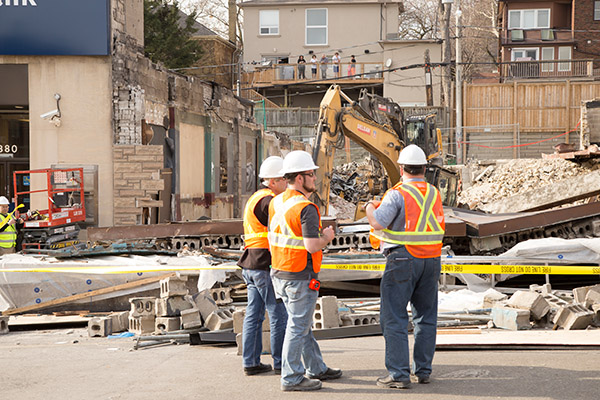 The building at 876 Eglinton Ave. W. was meant to come down to make way for the Forest Hill Crosstown Station — but not like this.

The former restaurant building just west of Bathurst Street collapsed yesterday at about 2:20 p.m., sending seven people, including a seven-month-old baby, to hospital. Two had serious but non-life threatening injuries, while the rest had minor injuries.

A statement from Metrolinx on Monday said the building was being prepared for demolition “when a front wall collapsed and fell on the covered walkway, with the weight of the scaffolding. Pedestrians were on the sidewalk at the time of the collapse.”

Several of the injured were pedestrians using the walkway.

The Ontario Ministry of Labour has launched an investigation into the incident.

“We are going to find out who is to blame,” Labour Minister Kevin Flynn told a press conference Tuesday. “When we go back, when we read the report, we find out each and every time that it was preventable. That’s why we need to learn from this.”

Earlier reports that a crane had fallen and brought down the walls are unconfirmed.

The fallen structure was once the site of the House of Chan restaurant, one of three eateries in a row that were forced to move out, so they could be replaced by a secondary entrance to the Forest Hill station, originally called the Bathurst station, on the Crosstown LRT line.

November 5, 2013 Town Crier staff Comments Off on Bike lanes to be part of Eglinton LRT plan?