Back-to-back public consultations about the Eglinton Crosstown LRT project gave communities along the line the opportunity to see that station design plans are right on track.

About 200 people came in and out of the doors to Northern Secondary School for the meeting on Nov. 7, the second of two nights Metrolinx was holding a community consultation about the station designs. Any concerns people had were able to be submitted to Metrolinx on forms they filled out at the meetings.

The first dealt with stations from Bayview Avenue east to Wynford Drive. The second focused on four stations: Avenue Road, Yonge Street, Mount Pleasant Road and Bayview Avenue. Though there were some small concerns regarding each station, Metrolinx’s director of community relations Jamie Robinson found those who came were filled with curiosity more than complaints.

“People are just generally really excited about the LRT coming,” he said. “They’re interested in local issues in terms of where our designs are showing primary entrances and secondary entrances.”

Of the dozen or so people who spoke with the Town Crier at the meeting, none expressed concerns. All were happy with what they saw in the designs and said they had come to the meeting just to see what was being planned for their neighbourhood.

John Nichols and Kathleen Morris, who live near Bayview and Eglinton, said they’re hoping to take the Crosstown and wanted to see how it would look. Residents were concerned about the Mount Pleasant stop, which is planned to go in on the northeast corner where a Second Cup coffee shop maintains the façade of an old bank building. That façade will remain intact, Robinson said, but the Second Cup won’t be so lucky.

The same goes for the McDonald’s restaurant on the southeast corner of Bayview, where some people suggested simply using the northeast corner instead. Robinson said Metrolinx is leaving that corner, which consists of various small stores in a strip plaza, due to the potential for future development applications at the site and how they could work with developers to connect their projects with the LRT.

“I appreciate the chance to see how it’s going to look and how it will change the street level at each of the stations so you know where you go in and out and what stores will be gone,” Morris said, adding that she isn’t concerned about the potential loss at her future local station. “I’ll take transit over McDonald’s.”

“That’s an option we’re seriously considering, but it’s got a significant price tag associated with it,” he said. “So that will be considered by both the TTC and Metrolinx in terms of how to fund that.”

None of the stations designs are final. Robinson said they are merely reference design concepts, and there is still room for changes.

Ford not pleased but TTC fares going up

January 10, 2011 Town Crier staff Comments Off on Ford not pleased but TTC fares going up 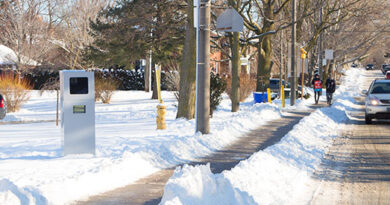