Parkdale-High Park MPP Cheri DiNovo is on her way back to Queen’s Park and is pleased to be a part of the larger NDP caucus.

“We’re coming back in an incredibly strengthened position, which is good for our voters,” she said. “We’ve increased our percentage in the house more than any other party.”

The NDP picked up seven seats in the Oct. 6 election to bring their total to 17. DiNovo said this puts them in a more influential position.

“It’s a minority government, so if the Liberals and (Progressive) Conservatives are willing to negotiate, we can actually get some work done on behalf of Ontario voters,” she said.

Originally elected in a 2006 byelection, DiNovo was re-elected this term with 46.4 percent of the vote. Her closest rival, Liberal Cortney Pasternak received 37.2 percent, significantly higher than her predecessor Sylvia Watson’s 29.3 percent.

“What happened was that the Liberals got more because the Tory vote and the Green vote collapsed in our riding,” DiNovo contends. “The Tories voted for the Liberals, which as far as I’m concerned, have a lot of similarities.”

DiNovo has been named party whip, which means it’s her job to make sure caucus members show up for votes.

“I’ll be part of the process of making sure things happen for Ontario voters,” she said.

Among her party’s priorities, DiNovo said the NDP would push for more money for daycare spaces and for the provincial government to take on a greater role in funding the TTC.

On a more local level, she said she is urging Dalton McGuinty’s government to immediately electrify an airport link in her district that is currently scheduled to serve diesel trains.

“That’s a huge priority for me, locally,” she said. “There are a number of priorities (for the NDP) … The question for us is who’s willing to make them theirs as well.”

She said so far, she’s been discouraged by the working relationship with the Liberal government.

“So far (they) don’t seem very cooperative,” DiNovo said. “Our leader Andrea has asked for a meeting, they declined … That doesn’t sound like a good first step.”

Despite the initial hurdle, DiNovo said her government is committed to working with all parties to meet their goals.

“We want this to work for Ontarians,” she said. “We don’t want to play political games.” 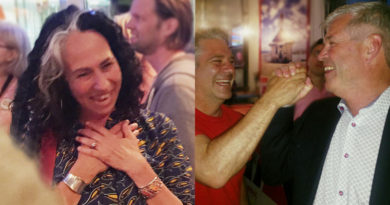