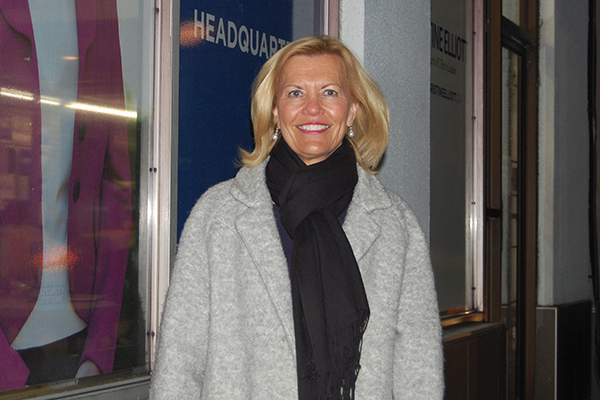 Midtown residents might be feeling a little blue thanks to a new neighbour. You’ll find her along Yonge Street south of St. Clair Avenue.

Her name is Christine Elliott, and she’s vying for the leadership of the Progressive Conservative Party.

“It’s really important for me as a leadership candidate to indicate that Toronto is important,” she said in a recent interview, explaining why she chose the Yonge and Rosehill Avenue location for her campaign headquarters. “We want to make some strides in Toronto in the next election, so we need to be more visible and a part of the community.”

She moved into the 1365 Yonge St. space in early November. It had been occupied in the 2014 municipal campaign by mayoral candidate Olivia Chow.

Elliott, the widow of former federal finance minister Jim Flaherty, represents Whitby—Oshawa at Queen’s Park. The 59-year-old mother of three grown sons is one of five who have put their names forward to succeed Tim Hudak, who resigned as party leader shortly after a disastrous June election in which the PCs lost nine seats. MPPs Vic Fedeli, Lisa MacLeod and Monte McNaughton, as well as Conservative Barrie MP Patrick Brown, are also in the running.

Elliott said she wanted her campaign headquarters to be in Toronto, and finding space near Bennington Heights, where she once lived for five years, means she is in “familiar territory.” The transit accessibility for volunteers who live downtown and the nearby amenities also contribute to making it a “fantastic” spot, she added.

“I have to say I really do like this location,” she said.

The visibility has been effective as well, as people have been walking in off the street to donate and sign up as new members.

“It’s a very positive feeling out there as I talk about my message of getting back to our Progressive Conservative roots of fiscal conservativism enabling social compassion,” she said. “The latter part is something people haven’t heard about from our party in the last few years and is something that has been important to me.”

Was Hudak factor in play in midtown races?

June 16, 2014 Philip Alves Comments Off on Was Hudak factor in play in midtown races?