A proposal to expand Holy Blossom Temple has made it through community council, despite opposition from residents concerned about increased air pollution and traffic.

The plan for the reform Jewish synagogue and Leo Baeck Day School would see a new three-storey wing added to the existing school.

It also proposes a one-way parking and drop-off zone on the west side of the site. This roadway would be built on a residential lot that the school bought as part of their expansion plans, and would connect Ava Road and Dewbourne Avenue.

At the June 22 meeting, Toronto and East York councillors voted in favour of sending the new application for approval at city council, but recommended that city staff consult with the temple and school to see if the parking and drop-off zone can be relocated to the northeast side of the site along Bathurst, where a playground is currently planned.

City staff will report on the recommendation at city council on July 6.

The idea of switching the location of the parking and drop-off zone with the playground came from concerned residents.

“I don’t think (the temple and school) are fairly balancing their own interests with those of the neighbourhood,” said Lorne Silver, who lives beside the residential lot.

He said the roadway will also be used for commercial vehicles like garbage and equipment trucks, which he worries will decrease the value of his house and his family’s ability to enjoy their backyard.

He also said the city didn’t properly study the pollution effects of having commercial traffic running between residential homes.

Silver is part of a group of residents who live on Dewbourne and Ava who are opposed to the plan. So far, 97 neighbours have signed a petition opposing it.

But Silver said residents are not convinced the roadway will improve the current traffic problem in the neighbourhood because the size of the property has increased but the number of parking spaces has remained about the same.

“I accepted (the traffic problem) at the time I bought my house,” he said. “But I certainly didn’t buy in thinking they would do this kind of renovation and create a roadway, more traffic and less parking.”

However, the school isn’t necessarily looking to increase enrollment, said Benjamin Applebaum, executive director of Holy Blossom Temple. They are expanding because the school’s facilities need an upgrade.

“Traffic problems are a challenge in locations such as this,” he said. “We do the best we can but we think we’re making things better.”

Despite the opposition from some residents, Mihevc says there is strong support in the community for this project.

“It’s been a two-year process. There’ve been a lot of issues that have been worked through.”

Holy Blossom Temple and Leo Baeck Day School first submitted a plan in 2008 that proposed tearing down the existing three-storey school and replacing it with a six-storey building.

The application was revised after residents voiced their concerns about the height of the new school.

Applebaum said the revised plans are much less intrusive to the neighbourhood.

“I think we’ve come a long way from where we were a number of years ago,” he said.

Silver said community council’s decision recognizes that there is an alternative solution to the traffic problem, but he thinks community council should have waited for city staff to finish the review before making a decision on whether to recommend the proposal for approval at city council.

Applebaum said their traffic consultant and architect drafted a plan with the playground on the west side and the parking lot on the east side, and the result was fewer parking spots and less playground space.

“The city’s requirement really is that we come up with the best plan to deal with traffic,” he said, adding that when they started their expansion plans, their traffic consultants and city staff agreed that building a driveway through the school’s property was the best solution.

“That’s why it was included in our plan,” he said.

Residents have also said the students would be exposed to car fumes from Bathurst while using the playground.

But Applebaum said the playground will be elevated off Bathurst and shielded by trees, making it a healthier environment than most parks and playgrounds in the city that are next to main streets. 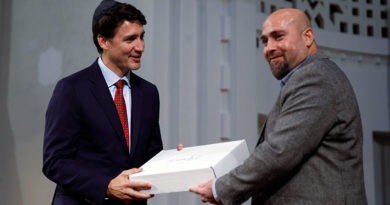 ‘We need to call out racism in all its forms’

May 19, 2019 Eric McMillan Comments Off on ‘We need to call out racism in all its forms’