Imagine being the owner of 40 Hillsdale Ave. E., a two-level red-brick townhome near Yonge and Eglinton. Every morning you watch the sun rise above a house-lined street dotted with trees and every evening watch it set behind your neighbour, fine furniture retailer The Art Shoppe.

Now imagine no longer seeing the sunset because your neighbour is a 29-storey condo.

With The Art Shoppe moving from its current site, property owners Freed Developments plan to redevelop the existing building into a pair of condominium towers, 38 and 29 storeys tall.

“The current structure is essentially a long, one-or-two-storey cement block that doesn’t contribute to the street very well,” says councillor Josh Matlow. “I don’t think anyone would disagree that something better could be there.”

Matlow adds that according to city planning guidelines, the most appropriate development for the land would be mid-rise — something between eight and 15 storeys — not a pair of tall buildings.

“I’d like to see a beautifully designed mid-rise building with retail at grade … and residential above,” he says.

Matlow says The Art Shoppe is located south of land the city has designated for urban and apartment neighbourhood development, where high-rise buildings are encouraged.

Instead, much of the area south of Eglinton Avenue and north of Davisville Avenue has been designated for neighbourhood development, he says.

Matlow compares the effect to Yonge Street and Davisville Avenue, which includes schools, retirement homes and houses on the north side, and 20 to 30-storey buildings on the apartment neighbourhood-designated south side.

However, Freed Developments may have precedent on its side as the high-rise towers of Minto Midtown was constructed on neighbourhood-designated land.

The towers were controversial with the North Toronto Tenants Network launching an appeal to the Ontario Municipal Board, which ultimately allowed their construction.

Matlow says that unlike the Minto towers, which are directly adjacent to apartment neighbourhood land, The Art Shoppe is located next to single-family homes.

“There would be no reasonable transition between a two-storey house and a 38-storey building,” he says.

“They were not saying they didn’t want any development there … but it has to be reasonable,” he says. “Should we just roll over and capitulate every time a developer wants to make more money? I don’t think so.”

Matlow says there will be a public meeting to discuss the development in the spring, and that he’ll post the date on his website.

A spokesperson for Freed Developments said the company believes it would be premature to offer thoughts at this time, but that it looks forward to sharing details in the future. 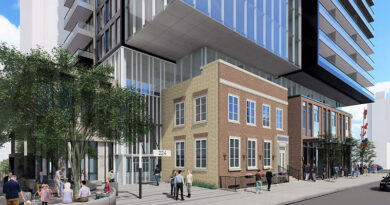 One thought on “Fight is on over Art Shoppe condos”