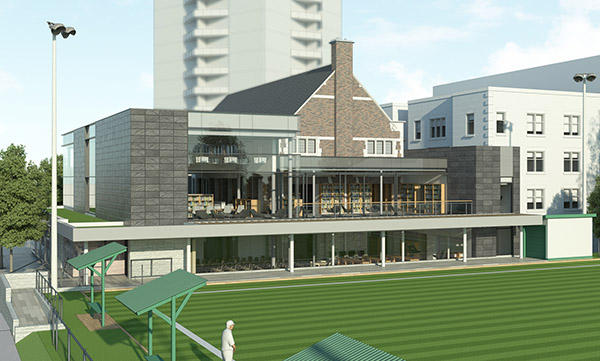 Wychwood residents — especially members of the Wells Hill Lawn Bowling Club — seem mighty pleased with the final designs for their 100-year-old library’s pending renovation, if the comments left on a writing easel during an open house Nov. 17 are any indication.

“It’s clear when you see the comments that the architect has done a great job,” Ward 21 councillor Joe Mihevc said during the open house. “The way the heritage has been respected, the way they’re going from a dark 6,000 square-foot library to a 15,000 square-foot library with lots of windows… I think this is going to be a really great project that the community will be wonderfully proud of.”

When future visitors enter the renovated Wychwood Public Library, branch libraries director Anne Bailey said, they will be able to choose between the original Bathurst Street entrance, which will be reopened and wheelchair accessible, and a modern vestibule from Melgund Road.

Once inside, depending on their age and interests, guests could bring their little ones to the library’s new early literacy centre, organize or attend an event at the library’s new theatre, or create something in the digital innovation hub. They could also relax in the new seniors’ centre. The renovated library will have several lounges with generous views of the street or lawn bowling green outside. There will also be reading and study sections for older children and teens.

“We want to have a project that meets the needs of the community,” Bailey said. “They’re our neighbours and our partners, so we responded whenever possible to what people and Councillor Mihevc told us in consultations.”

Bailey admitted that a previous version of the renovations had ruffled the feathers of several members of the Wells Hill Lawn Bowling Club, which was founded in 1929 and has operated from its clubhouse next to the library since 1948.

The club’s future headquarters were initially located on the library’s north side, well away from street traffic, a Wells Hill member who attended the open house said. Members were much happier with the updated design, which gives the club a meeting room and southeast entrance of its own, complete with vintage photos in the window and the words “Wells Hill Lawn Bowling” next to the door.

“I love the plans for the (lawn) bowling, also for the library,” a member who identified herself as “Janet” wrote on the comments easel.

In designing the renovations, architect Eric Riddell told the Town Crier he had two goals in mind: to restore the 100-year-old Carnegie Library building to its original glory, best exemplified by the update envisioned for its second-floor Great Hall, and to add a new, contemporary structure that would support it while retaining a distinctive look of its own.

Renovations of the Wychwood Public Library are expected to begin in 2016, with the library reopening in 2018.

End in sight for traffic congestion

November 1, 2011 Town Crier staff Comments Off on End in sight for traffic congestion