As the Liberals were being swept to victory across Canada, many were left scratching their heads not at the fact that the Liberals won, but by how much.

And the race in University-Rosedale was certainly no exception, having been seen as a dead heat between Liberal pseudo-incumbent Chrystia Freeland and NDP challenger Jennifer Hollett just weeks leading up to the Oct. 19 election.

But University of Toronto political professor Nelson Wiseman says the riding was likely never going to become an NDP seat unless the NDP “had finished a strong second, possibly first (across Canada).”

“I thought Hollett was always a longshot,” he said. “I thought (the NDP) had a better chance in Toronto Centre.”

Wiseman said there was one key date that led him to be certain the Liberals, including Freeland, would win the race: Sept. 9.

“It was the first day a national poll appeared that showed the Liberals in first,” he said. “After that, you started having a stiffening of the spine of a lot of soft Liberals who were going to vote for the NDP because Conservative ads had convinced them Justin just wasn’t ready.”

Why does that swing in polls matter locally?

Wiseman says individual candidates in ridings have very little to do with their outcomes, and that people really just vote for the party leader.

He said he’s seen estimates that a local candidate can account for five to eight percent of the local vote, but the rest stays in line with the popularity of the parties nationally.

“If your local candidate is the prime minister, leader of the opposition, or any kind of minister, that’s a bigger assist,” he said. “But the local candidates generally aren’t that important. Freeland had a higher profile than many local candidates and so to some extent did Hollett, but that was still very much secondary.”

Freeland, who was MP for the old Toronto Centre riding and opted to run in the newly formed University-Rosedale instead of the updated Toronto Centre, said she was always confident she could win.

“We went into this election with all of the downtown Toronto ridings represented by Liberal MPs and we were confident we would hold those ridings,” she said, referring to Spadina-Fort York as well. “We were always confident we would win here.”

Former Liberal MP Bill Graham who held the Toronto Centre seat from 1993 until 2007 when he left politics, quipped that Freeland is “the best candidate we’ve ever had.” He says he was confident she would win the riding.

Hollett said despite her second-place finish behind Freeland, she was “feeling proud” of the work accomplished during the campaign, which built a strong presence in the riding and “brought people together.”

She was also gracious in defeat, smiling as she offered a congratulatory message to her months-long rival.

“Congratulations are in order for Chrystia Freeland and to the Liberals — it’s their big win and they should be very proud of that,” she said. “But we’re feeling great here and there’s still lots to celebrate.” 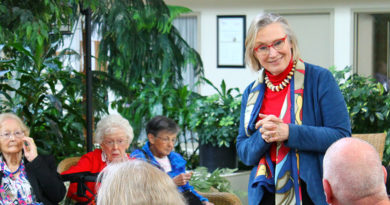 DiNovo's back for another term

November 8, 2011 Town Crier staff Comments Off on DiNovo's back for another term

May 26, 2011 Town Crier staff Comments Off on New Conservative MPs must stand and deliver