Ian Shanahan walks in a calm, alert stride. A bird whistles, his ears perk. He stops and swiftly cranes his neck toward the sound. He knows the sharp notes are coming from two pairs of male and female robins.

“I’m a naturalist but it should be called nature interpreter,” he says.

On Feb. 18, Shanahan led a nature walk through the Evergreen Brickworks that gave bird watchers a chance to participate in the Great Backyard Bird Count, an annual four-day event where North Americans count, record and submit the number of each species in their backyard.

The guidelines are very lax. At minimum, participants must count birds in any one location for 15 minutes, record the number of each species spotted, and submit their results on the event’s website. Watchers can count during all four days, as long as separate lists are submitted for different locations.

With few insects for birds to eat during winter, there aren’t many species in Ontario right now, but Shanahan said that has its advantages.

“It’s a great time of the year to get into (bird watching), it’s not nearly as challenging as spring when you have 200 species rather than 20,” he said.

At the Brickworks, the group saw cardinals, chickadees, robins, a downy woodpecker and a variety of finches and sparrows. Some of their songs indicated spring is coming soon, said Shanahan.

“I think of songbirds singing when the leaves are on the trees,” he said.

Between working as a naturalist at Algonquin Park and attending teachers college, Shanahan does volunteer research at the Brickworks once a month. He’s been bird watching since he was 12 years old and is captivated by the distances some travel, like his favourite, the red knot, which migrates from Argentina to the high Arctic.

Cathy Rand, who has been monitoring the bird feeders at the Brickworks for the past two years, joined the count on Shanahan’s walk.
“It started with nature, any excuse to be outside,” she said. “ It’s also knowing that you’re contributing to science.”

Every weekend, she and other volunteers watch and submit their results to Project Feeder Watch, a survey where birders across North America monitor feeders through the winter and submit the number of each species spotted.

The Brickworks hasn’t always been a home to these species. Since it reopened in 2010, a revitalization took place that has allowed animals to form natural habitats, said Evergreen Brickworks coordinator Stuart McPherson.

Volunteers like Rand planted 14,000 wildflowers and put up feeders, giving birds a lot of seeds to eat, said McPherson.

Since then, species like bohemian waxwings, dark-eyed juncos and purple finches have been spotted, he said.

“It’s fun to see the whole site evolve,” said Rand. “You see how a derelict site can turn into a nature-loving zone.”

With spring around the corner, birders have a lot to look forward to. Through April and May thousands of birds will be travelling across Ontario from all around the world, said Shanahan.

“Seeing a bird like the scarlet tanager in May in downtown Toronto that’s bright red, knowing it came from the Amazon and going to northern Ontario,” he said. “You can see how the imagination gets captured.” 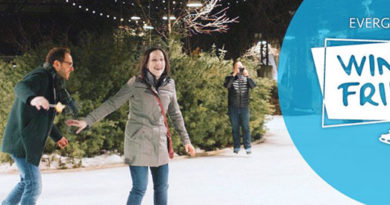 Winter at the works

March 15, 2013 Town Crier staff Comments Off on Winter at the works